Melissa Gilbert is on the mend after she bashed her head into the floor while performing on Monday night’s episode of Dancing With the Stars. Find out how she’s doing now — and if she’ll be there for elimination tonight. 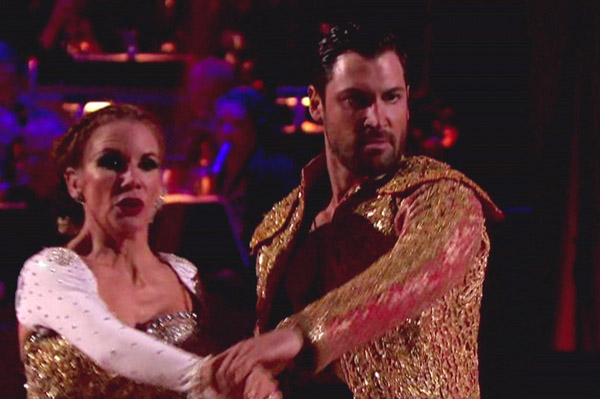 Host Tom Bergeron later announced that Gilbert went to the hospital to get checked out.

“(Melissa) had some concussion-like symptoms after she got her scores,” Val Chmerkovskiy told CNN after the show. “She was a little nauseous and dizzy, so she decided to go to the hospital.”

Fellow DWTS celeb Gavin DeGraw carried her off the stage when she complained of dizziness, according to partner Karina Smirnoff.

“I just asked if she was doing better but they don’t know. She hit her head in the middle of the dance. After which she felt really lightheaded and dizzy so right away they took her to the hospital,” Smirnoff told reporters. “Actually Gavin carried her down to the red room because she was too weak to walk. After that the show kept going and we had to get ready to dance, and I think that’s when they took her to the hospital.”

DeGraw managed to make it sound sorta creepy when he compared the heroics to a post-marital moment.

“We’re not married but that’s kind of how I carried her, like we were crossing the threshold into our honeymoon suite,” he said. “It’s usually a pretty short walk but tonight it was like 100 yards downstairs and stuff.”

The diagnosis? Concussion, according to her rep.

“As a result of hitting her head during the dance [Monday], Melissa has a mild concussion and whiplash. She is at home, resting comfortably and looking forward to her next dance,” her rep told CNN.

Is Steve Urkel a woman beater? >>

Getting injured is never fun — and concussions are nothing to joke about (spoken from personal experience), but we’re thankful that the Little House on the Prairie star didn’t injure her already-fragile spine. The actress has gone through several surgeries to fuse her spine — the last one was in 2010.

She wasn’t afraid of competing on the show, though.

[Rehearsals] didn’t hurt my surgical area,” she said before the start of the new season. “It hurts everything else… it hurts my hips, it hurts my feet, it hurts my arm.”

Her hottie partner Maksim also had plenty of confidence in her abilities.

“She’s good,” he said in early March. “She’s in great shape. She has gone through stuff in the last couple of years — physically — with surgery. I was worried about that, [but] knock on wood, things seem to be fine.”

It doesn’t sound like she’ll be at the show tonight, though anything is possible. Let’s just hope she isn’t eliminated — that would just throw salt in the wounds, huh?