Is Katy Perry getting jaded? The star says she loves creating but is so over being famous. Read on to find out why. 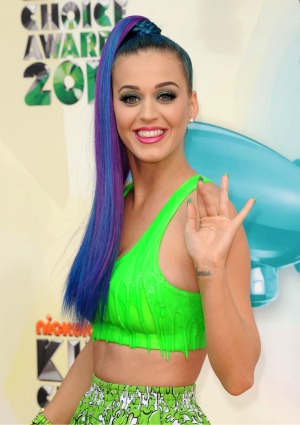 Singer Katy Perry is all over the tabloids for her divorce from short-term husband Russell Brand, and the star said she is so over all the fuss. She is grateful for the success but hates fame. So why is she releasing a full-length film showing all the behind-the-scenes dirty laundry of her concert tour?

“One of my main reasons for doing this is that people think of me as though I’m Dorothy in the ruby slippers,” Perry told Teen Vogue, making a Wizard of Oz comparison of her upcoming flick Part of Me. “I want them to see everything else that’s involved. Yes, I am her, but at the end of it all, I’m also the guy behind the curtain.”

“I wanted to document the tour, because when we started to book these really big venues, I felt like I was going all in. And I figured that by the end of it I’d be bankrupt or else I’d look like the smartest music businesswoman of my age, and I thought either outcome would be interesting,” Perry explained.

“More than that, though, I wanted to show people this parade that surrounds me… I wanted them to see the engine. I think sometimes they look at me and wonder, How is it possible that she continues to have this kind of success? Why are the stars so aligned for her? But, while that is a factor, it’s not the whole story. I also work my tail off! And, of course, I wanted people to be able to experience the tour and all the joy it brought, which is why we shot it in 3D.”

Wanna star in Katy Perry’s new movie? Now you can! >>

So basically Perry wanted fans to know that fame comes with a heavy price — and it’s a price she is getting weary of paying.

“I’m tired of being famous already!” she said. “But I’m not tired of creating. Fame is, I think, just a disgusting by-product of what I do. It’s quite a delicate creature — it’s a wild animal of sorts. It can love you, and then it can attack you.”

“I still want to be as approachable and relatable as possible — when I meet fans and they’re crying, I’ll say, ‘Calm down, there’s nothing to cry about. I’m not going to bite you or attack you or grant you three wishes. Let’s just hang out and have a good time.’ But really, I stopped focusing on what other people think a while ago. If you try to be everything to everyone, you’ll only end up completely confused.”

Read the complete interview with Katy Perry in the new issue of Teen Vogue.