Alicia Silverstone nearly caused an internet riot when she posted a video of herself feeding her son pre-chewed food from her own mouth. See what she has to say about all the fuss. 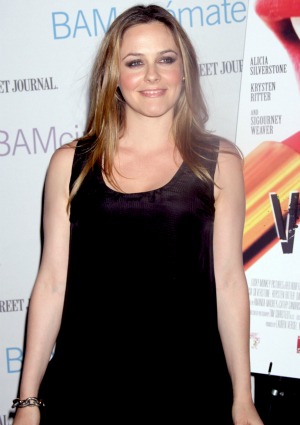 When Alicia Silverstone blogged about her unusual way of feeding her son Bear, the blogosphere went nuts. In case you missed it, the actress posted a video of herself premasticating food and passing it straight into her son’s mouth like a bird.

Gross? Some think so — but according to Silverstone it certainly is not an unusual practice.

“I wasn’t saying this was anything somebody should do,” the star said while promoting her upcoming movie Vamps at New York’s Brooklyn Academy of Music. “I wasn’t trying to be independent or cause such a ruckus. I’m very glad that I did it.”

“People have been feeding their kids that way for thousands for years,” she explained. “It’s a weaning process. It’s just a thing that has been going on for thousands of years and I didn’t think I was inventing anything…”

“Honestly, when I posted the video I was not thinking, so maybe I was like Cher,” she said, referencing her ditzy character in her breakout film Clueless. “I think it’s adorable and it makes me laugh every time he does it.”

“Every time my husband [musician Christopher Jarecki] goes to the YMCA, some guy comes over and says, ‘That’s how we do it in the South,'” she said. “Between him getting those great comments and me knowing in my gut it’s natural and lovely, I really wasn’t trying to tell anybody what to do.”