Lifetime may have got a little more than they bargained for when they asked Jennifer Love Hewitt to bring the sexy to The Client List. The show about getting it on is now covering up their star’s bountiful assets. 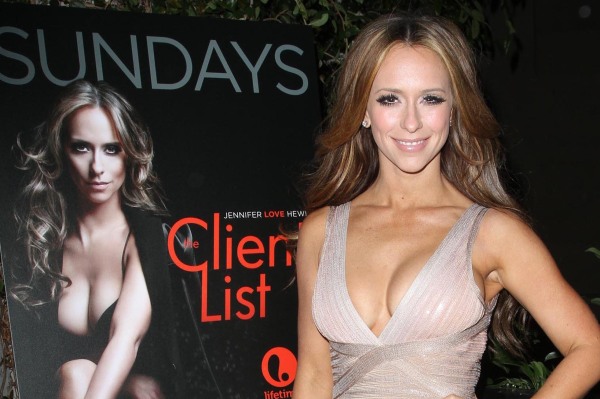 Jennifer Love Hewitt‘s The Client List has been deemed too hot for a handful of publications, forcing Lifetime to give the actress a digital breast reduction. The star, seen here posing next to her original ad, was as surprised as the rest of us to learn that not only was her bust was altered to appear smaller, but she was digitally given a higher cut bra for a selection of promos.

“Somebody sent me a copy of the photograph, and I was like, ‘Ummm, what happened?'” Jennifer Love Hewitt commented in reaction to her altered The Client List ad. “I’m not quite sure what’s going on. But apparently somebody wanted me to have a boob reduction.”

The 33-year-old, who’s been crushing on Adam Levine as of late, didn’t even have the chance to approve of the more conservative images before they hit the press. Hewitt went on to say, “The thing that’s even crazier is that usually when they do that stuff, I had to see the photograph before they went out anywhere, and I never saw a new version of it.”

A source commented on the Jennifer Love Hewitt breast reduction situation to E! News, explaining, “Some magazines and websites wanted something a little tamer. So Lifetime changed them a little bit. Things like this happen all the time. Would Lifetime want all the ads to show them as they really are? Of course!”

The Client List, in which Hewitt portrays a woman in dire financial straits who gets a job working at an X-rated massage parlor, has received criticism from conservatives from the get-go.

“It’s a TV show,” Jennifer Love Hewitt said previously, exasperated by the backlash over the sexy subject matter. “They’re not offended by Dexter or Nurse Jackie, but they’re offended by me giving a happy ending?”

Do you think Jennifer Love Hewitt’s The Client List ad is too sexy?