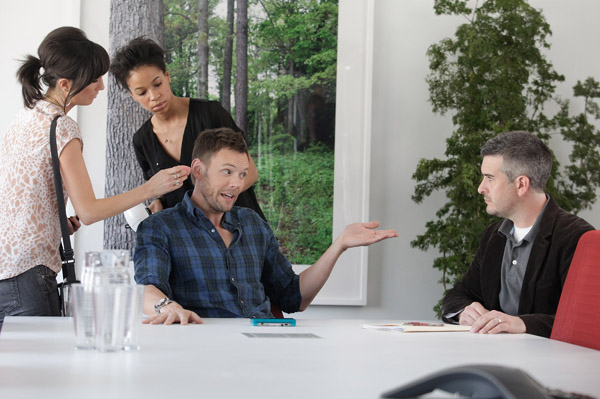 Who do you think of when you think of video games: If you’re like us, you think of The Soup‘s Joel McHale. Wait, you don’t? Too bad, because McHale is exactly the comedian Nintendo turned to for help promoting their Nintendo 3DS in a new “viral” video.

In the video, McHale argues back and forth with an associate on the best way to make an ad that will get a bajillion hits by sundown.

“It’s hard to make a commercial that people don’t realize is a commercial until it’s too late,” McHale deadpans in the ad. “I mean, that’s like trying to convey the 3D image of the Nintendo 3DS within a lousy 2D video.”

McHale has plenty of ways to create a viral video: Groin kicks, sneezing pandas and bikini-clad models. “Look, whatever we shoot, I want it to feel organic,” he yells. “I want it to be homegrown, and I want it to be raw and real, all right?”

Of course, it’s all a tongue-in-cheek video to promote the popular year-old gaming system that retails for $170.

“I’m not a sellout,” McHale — flanked by bikini models — says before putting on a sash and a “Mushroom King” hat. “Buy Nintendo 3DS now!” they all declare at the end.

The video is pretty cute — and it’s not bad publicity for one of McHale’s other projects: The hilarious NBC comedy Community. The show has had to face many mountains over the past year, including possible cancellation and Chevy Chase’s enormous ego.

We’re glad it’s staying on the air for now — especially since it’s obvious how much McHale loves being on the show.

“Where else can you find a character who gets sexually aroused by Dalmatian costumes? Or a Middle Eastern character with Asperger’s who can only relate to the world through pop culture references?” McHale told The New York Times in a recent profile. “And then there I am singing Seal’s ‘Kiss By a Rose.’ There’s paintball battles. There’s zombies. Dungeons and Dragons. It’s brilliant.”