Melissa Gilbert was taken to a Los Angeles hospital on Monday night when she injured herself during Dancing With the Stars. 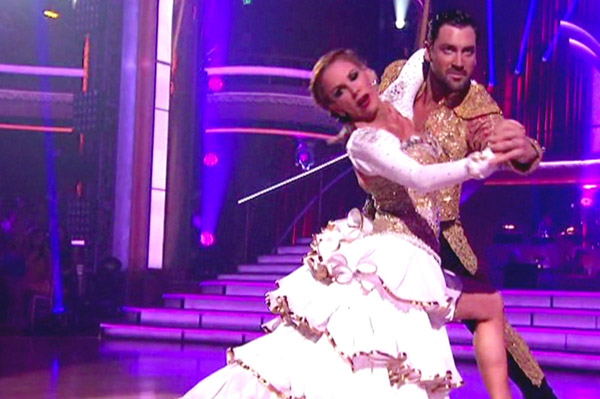 It was the best of nights and the worst of nights for Dancing With the Stars celebrity Melissa Gilbert. First, judge Bruno Tonioli praised her and partner Maksim Chmerkovskiy for their paso doble, calling it her “best performance by far.”

A few minutes later she was rushed to the hospital with dizziness stemming from a performance head slam on the dance floor. “If you’re wondering why Melissa and Maks are not here, she injured herself and as a precaution, has gone to the hospital to get it checked out,” host Tom Bergeron told the audience during the show Monday night, adding that they’ll have an update on Gilbert during the Tuesday night show.

The health of the former Little House on the Prairie star is of special concern — she had spinal cord surgery in 2010 to fuse her spine in two places.

However, she’s been a trouper through the whole thing, even saying that initial rehearsals didn’t hurt too badly. “[Rehearsals] didn’t hurt my surgical area,” she told reporters in March. “It hurts everything else… it hurts my hips, it hurts my feet, it hurts my arm.”

Chmerkovskiy is also confident in her abilities.

“She’s good,” he said last month. “She’s in great shape. She has gone through stuff in the last couple of years — physically — with surgery. I was worried about that, [but] knock on wood, things seem to be fine.”

Let’s hope he knocked on a lot of wood — we’d hate to see Gilbert leave the competition before it’s her time.