With a Golden Globe nomination and a secured second season of New Girl, Zooey Deschanel doesn’t have time to nurse dating cravings or maternal instincts. 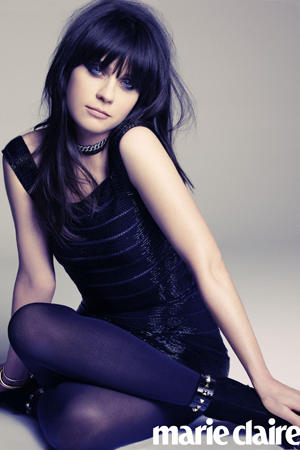 We love watching Zooey Deschanel on the Fox hit comedy New Girl every Tuesday because she’s quirky, fun and hilarious. Besides her gorgeous blue eyes and perfectly trimmed bangs, it’s what makes her different that makes her fans — and onscreen roommates — love her week after week.

The actress admits she’s aware of her uniqueness, but still doesn’t understand the appeal.

“People do think I’m weird,” she says in the May issue of Marie Claire. “I don’t know why.”

She also revealed that her veer from normalcy isn’t limited to her laughable behavior, but also her life priorities — Zooey doesn’t want to have children.

“That’s never been my focus,” she explains. “My sister [Emily Deschanel] was always very motherly, babysitting and stuff. I like kids, and I like being around kids — but it was never an ambition, something, like, I need.”

Another prong of the life plan she doesn’t find necessary is a beau — since splitting from Death Cab for Cutie rocker Ben Gibbard, she’s staying as far away from the dating scene as she is from maternity clothes.

“Honestly, I’m just going through a divorce, so I don’t really think that’s something I want to get into now,” she says. “I don’t have time to date.”

Deschanel also elaborated on her experiences being bullied as a child for being so different: “I still have in me the same awareness when I was 12 and chubby and a girl was spitting in my face. I’m the same person. Certainly you change, and you change perspective, you have other experiences. But isn’t it funny — I can still remember when I was treated differently from the way I’m treated now.”

Read the full interview in the May issue of Marie Claire, which hits newsstands on Tuesday, April 17!