She may play a manipulative, mean-spirited roommate in Don’t Trust the B—- in Apartment 23, but Krysten Ritter is no “B.” We sat down with the charming actress to chat about her new flick L!fe Happens, and found 10 reasons why we think she is ah-mazing! 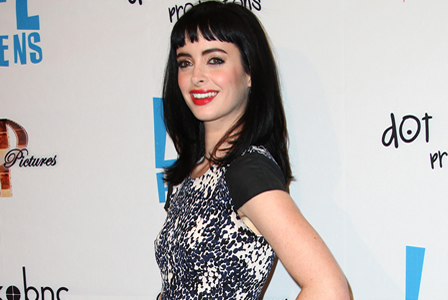 She’s used roaches as a weapon (Okay… not such a nice girl move), but she knows the value of good friends and hard work. Read on to see why we think Ritter is on the rise.

Krysten Ritter brought her “baby,” pup Mikey Mohawk, along for our interview and couldn’t help but rave about him.

“I have the love of my life right here, Mikey Mohawk,” Ritter told SheKnows. “I’ve never had this responsibility before, and it’s really cool. He’s spoiled rotten. He’s very lucky.”

She works hard for the money

Ritter has been in the biz for a while now; she started off as a model at 18 and later switched to acting.

“I spent the past 10 years hustling, and psychotic, and working 24/7,” said Ritter. “That’s all I really focused on. I was always like, ‘I have to work harder, and harder, and harder,’ which is great because it got me to where I am. Now I’m feeling a little bit more comfortable. I still work my a** off… but I’m in a pretty great place.”

She lives a healthy lifestyle

With a green juice in hand from L.A.’s popular Pressed Juicery, Ritter told us that she loves eating healthy and staying active. Her favorite activities include yoga, hiking and hitting up the YMCA!

She’s not just a pretty face

Not only does Krysten star in the female-powered flick, L!fe Happens, she also co-wrote it.

“There’s like a major hole [with female comedies],” Ritter told us. “You had Wedding Crashers and those cool movies, and we wanted to do a female version of that. We started writing it four years ago, and it took a while. We went through every sort of Hollywood stereotype and development hell. Eventually, we were like, ‘Why don’t we just make the movie ourselves?!’ So we called up some friends, came up with a couple bucks, and just made the movie.”

She hangs with a really cool crew

Krysten’s co-stars in the flick, Rachel Bilson and Kate Bosworth, are actually her friends off-screen as well.

“I love them,” said Ritter. “Kate is just this gorgeous freak of nature, and she did a great job in the movie of playing that tough, ballsy feminist. I called up Rachel and asked her, and she read it and said yes immediately.”

“I love my girlfriends,” Ritter told SheKnows. “I always know if something’s wrong or I need to celebrate, they’re always there. It’s rare, if you get good news, that people around you are happy for you. That’s hard to come by.”

She shares our girl crushes

“I love me some Tina Fey,” said Ritter. “She’s so smart and so funny. And Kristen Wiig. What I love about them, is that they self-generate. They write, they act, they produce.”

While the 30-year-old says she does see children in her future, she’s enjoying where she is right now.

“I have such Peter Pan syndrome,” said Ritter. “I look in the mirror, and still think I’m 19.”

When discussing evil roommates like her character in Don’t Trust the B—- in Apartment 23, Krysten let us in on some roommate pranks she pulled in the past.

“There was a time in New York when I was living with eight other models in two-bedroom apartments in bunk beds,” said Krysten. “This one girl and I did not get along very well… I may, or may not have, put roaches in her bed.”

Pranks aside, when the going gets tough, Krysten is there for the people she loves.

“The most important thing is being supportive,” Ritter told us. “You need cheerleaders. That’s what friends are. You change and you grow. If you really support your friends and let them grow, it’s a beautiful thing.”

Be sure to catch Krsyten Ritter, Kate Bosworth and Rachel Bilson in L!fe Happens in select theaters starting April 13.

Read more about girls we love and why