Can’t get enough of Zooey Deschanel’s awkward quirk on New Girl? Fox’s entire Tuesday night comedy block has been renewed for another season! 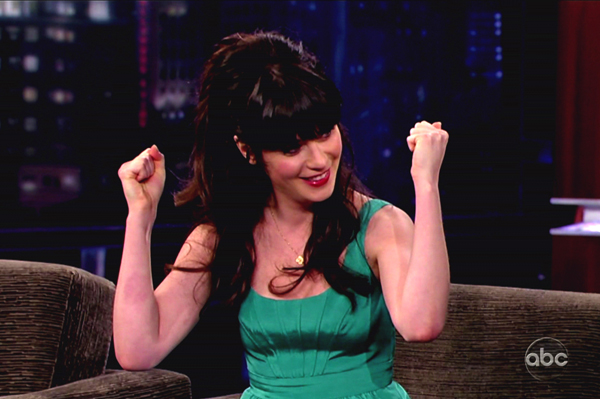 Well, it looks like Jess is a hit with the boys in the loft and audiences everywhere! Fox announced earlier today that the network has picked up the Zooey Deschanel comedy for a second season.

New Girl is one of three Tuesday night comedy shows being renewed for another string of hilarity, alongside Glee and Raising Hope.

“Over the past season, New Girl has become the hottest new appointment series for young adults; Raising Hope has established itself as one of the smartest and most unique offbeat comedies on television; and Glee has continued its success as a genre-defying, global cultural phenomenon,” said Fox Entertainment chief Kevin Reilly in a statement announcing the news, according to The Hollywood Reporter.

He added, “All three of these comedies add a fresh and distinctive flavor to our Tuesday nights, and I’m really happy to bring them back to our air next season.”

Dermot Mulroney was equally impressed with the freshman comedy show while guest starring as Jess’ divorced doctor and love interest. “It’s like they are heckling you while you are trying to act,” he explained. “It’s time-consuming, of course, but it’s smart… The whole cast and crew work long hours to get the best on television they can, which I really admire. There is no slouching on this show.”

We’re looking forward to this show’s second season, and will spend the summer wondering if Schmidt will continue his tendency to be constantly topless.