Danger lingered in the air, Joan reached her breaking point, and nothing was quite as it seemed in an uncommonly spooky installment. 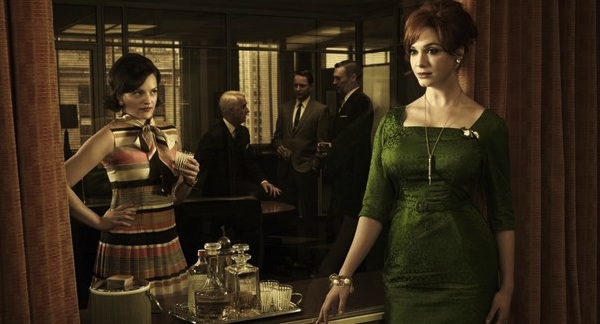 As early as its pilot episode, Mad Men positioned itself as a series about the ongoing struggle between presentation and reality. Throughout its five seasons, the show has proven to be less interested in how advertising is sold than in how people are “sold” to each other and to themselves. This interest was made clear, concrete and surprisingly creepy in last night’s “Mystery Date.”

The episode played out against the backdrop of the Richard Speck murders of July 1964 — a harrowing true-life event in which a seemingly harmless man raped and murdered eight nurses on one evening in Chicago. News of this terror reached Peggy fairly early in “Mystery Date,” and soon tongues were wagging about bumps in the night and strangers in doorways. How could anyone who seemed so normal be capable of something so horrible?

Early in the hour, Joan’s own doorway was darkened by the return of her husband, Greg, from military service. At first, all seemed ideal: Greg was finally back in Joan’s life and seemingly ready to help raise baby Kevin. No longer would Joan have to battle with her overbearing mother, no longer would she be a single mom, slugging it out in New York City — no longer would she feel the loneliness she had admitted to Lane in “A Little Kiss.”

But that dream gradually soured as the episode progressed and as we (and Joan) realized that Greg’s mind and heart were still overseas — and that he was more devoted to serving the needs of his country than in serving the needs of his wife. In the latter half of the episode, Greg finally told Joan he had accepted yet another year-long tour of duty. The argument that followed ended with Joan finally kicking Greg out of her life for good. For fans who remember Greg’s rape of Joan during season three, this decision was well overdue. Greg has always been something of a nightmare, and it was gratifying to watch Joan come to that realization in an episode so driven by rude awakenings.

Sally Draper experienced her own coming of age this week, as she found herself the recipient of all kinds of unwanted advice from creepy Grandma Pauline, Henry Francis’ mother. With the menace of Richard Speck hanging in the air, Pauline took the opportunity to share with Sally her dog-eat-dog philosophy of life, perhaps aiming to frighten Betty’s daughter into good behavior. Their conversations (underscored by Pauline holding a butcher knife!) led into a particularly unsettling anecdote about Pauline’s father’s method of corporal punishment. It’s little wonder why Don referred to Pauline’s house as “that haunted mansion.”

“I know you don’t think so,” Sally told her step-grandma during this tale of terror, “but I’m a good person.” Was Sally trying to convince Pauline or herself? She might look like her mother, but Sally’s sounding more and more like her dad, every day.

Meanwhile, Don battled a powerful fever that sidelined him at work and sent him home to bed — but not before he and Megan had crossed paths with one of Don’s former lovers, Andrea. The encounter (and Andrea’s continued interest in Don) prompted concern from Megan, despite Don’s insistence that his playboy days are behind him. “I’m going to be with you until I die,” he promised her. But to Don’s horror, Andrea appeared at his home and insisted on delivering her own carnal brand of home care to the ill Mr. Draper. Would audiences see Don prove himself a slave to his baser instincts, or has his new marriage made him a better man? I’ll leave that mystery unanswered here.

Over at Sterling Cooper Draper Pryce, the new copywriter, Michael, proved himself an unpredictable asset to the team. Yes, he wowed a client and won the day (“You know a lot about women,” the pantyhose-shilling client told Michael, suggesting that this kid might be even more of a threat to Peggy’s job than we’d thought), but he also disobeyed the boss by doubling down on a pitch that Don had flatly rejected. Even worse, Don’s lecture to Michael seemed to have little effect. Even if it might get him fired, Michael Ginsberg does what Michael Ginsberg wants.

What does Peggy Olson want? Even she is not so sure. Last night her storyline began with Peggy outsmarting (and extorting) Roger, who secretly paid her $400 to clean up a mess he had made with a client. The agreement kept Peggy working late into the night and, with the menace of the Speck murders hanging in the air, more than a little on edge at the office. It was there that she encountered Dawn, the new African American secretary, sleeping on the couch and fearful of walking home alone. Ever the good Samaritan, Peggy invited Dawn to stay with her for the night.

What followed seemed, at first, to be the makings of an unlikely friendship, as Don’s former and current secretaries chatted on Peggy’s couch. (Not that the shy Dawn had much to say.) “We have to stick together,” Peggy told Dawn, as the worldly Miss Olson drunkenly pontificated on the roles of women in the professional arena. Notably, Peggy confided her discomfort with acting “like a man,” but also her insistent feeling that she had to do just that in order to remain successful. But throughout her efforts to relate to Dawn and to inflate herself, Peggy seemed to miss the larger point: The trials and tribulations of a successful white woman in 1964 were markedly different (and far less severe) from those of a young, black secretary of that time.

At the end of the night, despite how progressive and open-hearted Peggy might always believe herself to be, she still found herself uncomfortable with leaving her purse within arm’s reach of this kind-hearted (black) guest in her home. For Peggy, the nightmarish tone of the episode revealed an uncomfortable darkness deep within herself: The unsettling darkness of prejudice.