SheKnows sits down with Lockout star Maggie Grace to get all the dirt on playing up-close-and-personal (seriously!) with Guy Pearce. 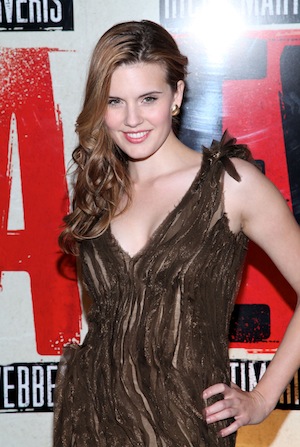 “We affectionately called it the ‘lap nap sequence,'” actress Maggie Grace says of the moment in her new action-thriller Lockout where she falls through the roof of a ceiling and lands in Guy Pearce‘s crotch. She laughs thinking back on the filming, which they had to repeat what felt like a million times, she says.

“Of course that’s the day where my mom has flown to visit for Thanksgiving. I’m like, ‘Oh my god, can this be more ridiculous?'” she says of filming the embarrassing scene.

Maggie Grace wowed us as Liam Neeson’s kidnapped daughter in Taken and Shannon in Lost, but this young actress is fast becoming the female action hero of a new generation. She’s not afraid to take the punches, and dish out a few, too.

In Lockout, Grace plays the president’s daughter who goes on a humanitarian mission to visit a space station prison which houses some of the deadliest convicts in the world. When there’s a breakout and she’s taken hostage, it’s clear there’s only one guy who can save her, our Guy. Guy Pearce.

Too bad she thinks he’s scum. But how you could you, Maggie? He’s adorbs! But she’s a tough woman with her own opinion, so no Aussie accent is breaking through that point of view.

“There’s definitely a combative relationship they have, but I think we all know how she really feels about it,” Grace gives it away. The frustration is only a mask for what’s really going on — hot, sexual tension with a hot Aussie actor. Yes, please.

Grace had a chance to get to know Pearce as she did a lot of rehearsing with the combat training and working with the wires. Perhaps this is the best way to steam things up on screen, get to know your partner first?

“It’s really there on the page. The dialog is so snappy and fun,” she says. “Most of all, the humor,” she says, drew her to the project. “I think the movie would be a great date night out,” says Grace. Perhaps some men will think that, too. There are a lot of laughs when it comes to Pearce’s character. Grace agrees.

“It was really hard to hold it together. He’s so dry and so acerbic,” she says of her co-star. Lockout opens in theaters April 13.