Is Lindsay Lohan already back to her old ways? Yes, according to one woman — she’s accusing the actress of punching her at a West Hollywood nightclub. The problem? She seems to be the only person who actually saw Lohan at the club. 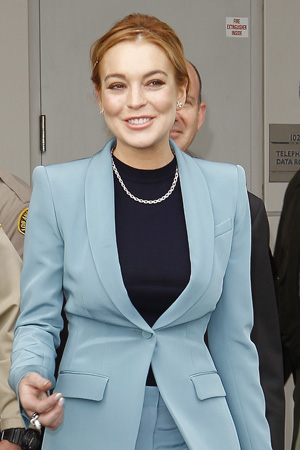 Another week, another accusation against actress Lindsay Lohan. This time, a woman is claiming that the newly probation-free actress punched her inside The Standard Hotel in West Hollywood last week.

According to sources, a female clubgoer walked into the West Hollywood police station and filed a battery report against the actress. TMZ reports that the woman was talking to Lohan’s male friend when she allegedly confronted the woman.

Sounds like Lohan is up to her old ways? Not so fast: She wasn’t even there, according to her rep.

“Lindsay was absolutely not involved in any sort of altercation whatsoever,” her rep, Steve Honig, said in a statement. “This is clearly another case of someone looking for money and 15 minutes of fame.”

Konig added that Lohan was actually watching Homeland at her Los Angeles-area home when the incident occurred.

Also, employees of The Standard Hotel told TMZ that they never saw Lohan that night.

“We have spoken with six people at the hotel — some of whom were working on the night in question — and none of them saw Lindsay that evening,” the website reported. “What’s more, none of them heard even a whisper that Lindsay was in the hotel, and none heard anything about an altercation.”

We’re going to go ahead and call this a big fat lie. Or, maybe someone who looked like Lohan accosted the woman? It’s possible.

Plus, we don’t think Lohan is going to do anything to risk her new court-free lifestyle. Judge Stephanie Sautner released the actress from her formal probation in March.

“She has done everything this court has asked of her,” Judge Sautner said.

Lohan also vowed to keep a more low-key lifestyle this time around. “I just want to say thank you for being fair,” Lohan told Sautner in court. “It’s opened a lot of doors for me, so I really appreciate it.”