Alec Baldwin has an admirer — and it’s not his new fiancé, Hilaria Thomas. Find out his connection to the woman arrested outside his apartment. 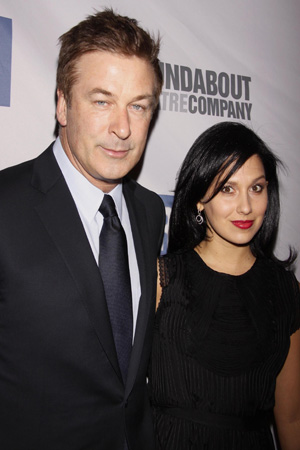 We don’t condone stalking, but we can sort of understand it when the stalker is obsessed with someone like Brad Pitt or Ryan Gosling. But, Alec Baldwin? Sure, he’s a fine actor on 30 Rock, but we don’t get the appeal.

Apparently, someone does: Cops just arrested a stalker outside his Manhattan apartment, according to the NYPD. Genevieve Sabourin, 40, is expected to stand before an NYC judge early this week to answer the accusations. The Canadian actress was once a publicist on The Adventures of Pluto Nash, a film that Baldwin appeared in with Eddie Murphy.

“As you know, stalking is a serious issue, so we’ve turned this matter over to the New York Police Department,” the actor’s publicist told CNN.

It’s not known if she actually met Baldwin while involved in the film.

The outspoken Baldwin — now engaged to 27-year-old yoga instructor Hilaria Thomas — hasn’t mentioned the arrest on Twitter, but he did take to the social network late last week to blast some New York Daily News reporters for invading one of her yoga classes.

He even poured salt in Alvarez’s wounds by nicknaming her “Snooki.”

“Shame on the no- talent trash from the Daily News for invading the privacy of 75 people in a yoga class to take a picture of someone,” he added. “Rest in Peace, the New York Daily News, which was once a good newspaper. Now run by the same trash that runs the [New York Post.]”