When Miley Cyrus tweets photos of fast food she’s drooling over, but refuses to eat, the gossip mill starts churning. Find out how the young star has healthily become slimmer and trimmer than ever! 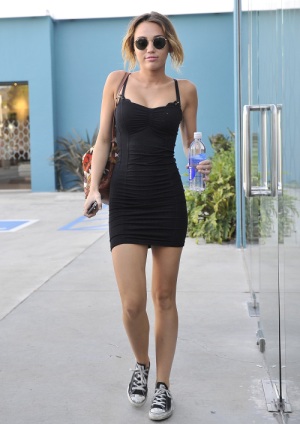 Is Miley Cyrus anorexic? Undoubtedly the actress has been looking svelte as of late, but not to worry: She swears her new physique has come about in a most healthy way!

The Miley Cyrus anorexia rumors got their start Sunday when the actress posted a photo of herself smelling fast food in a bag along with the message, “I can’t eat it. So I’m just gonna smell the s*** out of it! My mouth is literally watering.”

Reaction to the image, and Miley’s refusal to eat the food, sparked speculation the 19-year-old has turned to extreme, detrimental dieting tactics to lose weight.

Not one to let a rumor run rampant, Miley Cyrus quickly attempted to squash concerns shared by Twitter followers. “For everyone calling me anorexic I have a gluten and lactose allergy,” she explained Sunday. “It’s not about weight it’s about health.”

The star, pictured here leaving a Windsor Pilates class on April 6, continued, “Gluten is crap anyway!… I ate today at Easter lunch but all of it was healthy and even more fulfilling! Health is happiness!”

Not only is Miley Cyrus convinced gluten-free is the way to go for herself, she wants you to hop on the bandwagon, too! Encouraging her over 5 million fans to give it a go she tweeted, “Everyone should try no gluten for a week! The change in your skin, physical and mental health is amazing! You won’t go back!”

Despite her unsatisfied craving for fast food, Miley Cyrus did have an enjoyable Easter celebration. Tweeting to younger sister Noah Cyrus, she added, “love u noie! U saw how much I ate today at Easter lunch but all of it was healthy and even more fulfilling! Health is happiness!”

Will you give Miley Cyrus’ gluten-free diet a go?