Jennifer Love Hewitt is a little embarrassed she publicly revealed she’s got the hots for Adam Levine. The Client List actress now feels she ought to apologize to her crush, but simultaneously thinks she deserves a thank-you note. 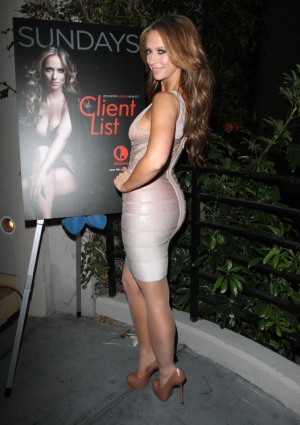 Jennifer Love Hewitt and Adam Levine don’t appear to be a match made in Hollywood heaven. Days after The Client List actress revealed she’s got her eyes set on the recently single singer, she’s considering issuing an apology.

When given the mic during a recent radio interview and asked if there was anything else she’d like to say to listeners, Jennifer Love Hewitt blurted, “Absolutely nothing, except that everybody is talking about it and Adam Levine will probably never speak to me.”

The Client List actress continued, “I feel like I should write him an apology letter on Twitter or something just to say I’m so sorry… I wasn’t thinking that it was gonna turn into this whole thing and I feel bad.”

Still, Jennifer Love Hewitt feels Adam Levine could have at least responded to her remarks with a few pleasantries. The 33-year-old admitted, “I was kind of hoping that he would say thanks for at least thinking that he’s hot. He is hot!”

Hot is exactly what Jennifer Love Hewitt is going for in her new Lifetime role as a single mom that’s, shall we say, making ends meet. However, the actress recently said that while she’s fine with the adult subject matter, she wouldn’t have taken the role if the part had demanded nudity.

“I wouldn’t have done nudity, no,” Hewitt said firmly. “That’s not something that I feel particularly comfortable with. I also think that it’s sexier not to show everything. I feel like imaginations can do way more.”

The gossip ignited by one little Adam Levine comment proves that point quite well, in fact!

Does Adam Levine deserve a Jennifer Love Hewitt apology, or does he owe her a thank you?