Titanic 3D and American Reunion were no match for the archer with the golden bow. The Hunger Games nabbed the number one spot at the box office for the third week in a row. 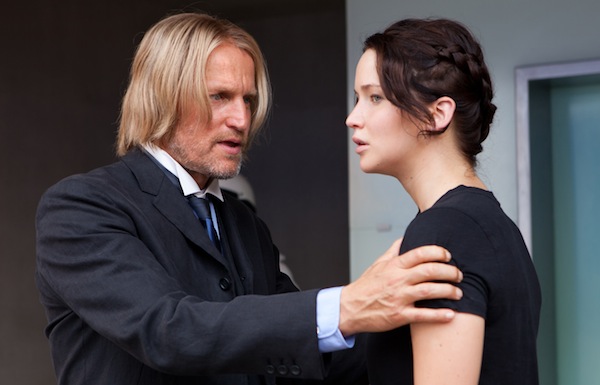 Grossing $33.5 million this weekend and over $300 million total in North America, The Hunger Games, the epic teen drama about the struggle to survive seems to have no problem doing just that at the box office, according to The Los Angeles Times. This is the third week in a row our girl Katniss beat out the competition. She’s en fuego!

Movie review: The Hunger Games is ablaze with Katniss>>

What some would consider worthy contenders became no match for the queen of the box office, although they gave Hunger Games a solid run. A look back at everyone’s favorite American Pie characters coming together for their high school reunion in American Reunion earned $21.5 million. Despite several DVD spin offs and a couple successful sequels, this is the first in Pie movie to bring fans back to the box office recently. The original 1999 film grossed more than $200 million worldwide in box office returns.

The reprise of James Cameron’s worldwide sensation Titanic 3D comes in third with $17.4 million, still a sizable number for a movie that’s been out on DVD for more than a decade.

Movie review: Leo is hotter than ever in Titanic 3D >>

Sam Worthington’s Wrath of the Titans, the sequel to his popular Clash of the Titans, suffers among the competition, grossing only $15 million in box office returns, bringing it in at number four.

The Julia Roberts and Lily Collins comedic look at the Snow White fairy tale, Mirror Mirror, slumps into fifth place earning an estimated $11 million. Fans are looking forward to seeing how Snow White and the Huntsman, the other Snow White movie on the film roster this year, will fare at the box office. That film, staring Kristen Stewart and Charlize Theron, comes out this summer.

The raunch-com about cops who go undercover in high school, 21 Jump Street, maintains a presence in the top 10, coming in at number six with $10.2 million. The Channing Tatum and Jonah Hill movie was number one at the box office its premiere week.

The tree-hugging story about saving the environment told by fun, furry Dr. Seuss critters, The Lorax, comes in seventh this week with an estimated $5 million.

Movie review: The Lorax is tree hugging in glorious 3-D >>

Cute critters aren’t the only soft spot this week. The quirky romantic comedy, Salmon Fishing in the Yemen, staring Ewan McGregor and Emily Blunt comes in eighth with $975,000 at the box office. Not bad for the little English indie film that could.

Disney’s trip to Mars with Civil War soldier John Carter comes in ninth with $820,000, and Housefull 2, the Indian action film about a sibling rivalry in London comes in tenth with $743,000 in box office returns.