That’s the good thing about eliminating a contestant who is still in high school — even though he was booted from American Idol, he still has prom ahead of him.

Related story Alex Rodriguez Is Reportedly Looking For 'The Next J.Lo' in His Dating Life 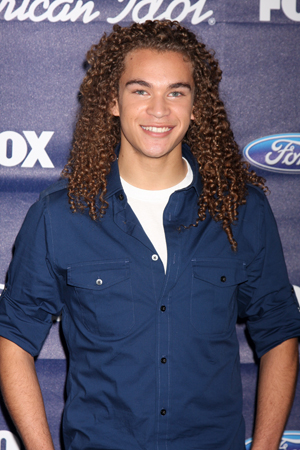 Last night, Jennifer Lopez again attempted to reason with Steven Tyler and Randy Jackson to use the judges’ seasonal save on DeAndre Brackensick. Though DeAndre was Tyler’s wild-card pick from earlier in the season, the Aerosmith rocker refused to save him yet again.

And DeAndre is perfectly okay with the American Idol elimination.

“I just think because I was a wild card I don’t need to be saved again,” said the eliminated singer to E! News. “This is my second chance from last year and then I got a second chance with wild card. You only get so many second chances in life.”

He admitted that after singing “Master Blaster” by Stevie Wonder, “I had a feeling I wasn’t going to get saved. I was saved already from the wild card. Even though that song didn’t really show off anything, I wanted to leave on a happy note, on something fun. I didn’t want it to be something sad.”

However, DeAndre has no regrets. “I’m glad I got eliminated the way I did. I went off on a good note. I went off happy. It wasn’t a sad moment in the way where I had a regret or I did something wrong. I have no regrets and I did what I needed to do.”

So what’s next for adorable DeAndre? The rite of passage for every other teenager, of course — prom! The high schooler has the show to thank for his newfound excitement.

“Idol really brought the confidence out of me. At the previous dances I worked as coat-taker and ticket-taker and stuff like that,” he explained. “Now I feel comfortable enough to go to a prom and just enjoy it. I’m glad I get to enjoy life as a kid; just the little things as a kid and then go enjoy the high life of Idol. I guess I get the best of both worlds.”

His self-esteem wasn’t so apparent before, even though his classmates — and American Idol voters — thought otherwise. “I was homecoming king, but I was ticket-taker then bag-checker and stuff because I was just so uncomfortable with myself.”