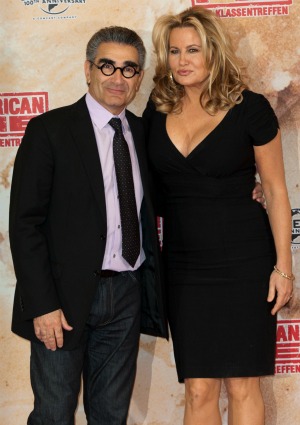 “Stifler’s mom needs to grow and progress and actually hook up with something more promising, and I love that I would hook up with Jim’s dad,” said actress Jennifer Coolidge, who plays the busty blonde, in an interview with the Associated Press.

Who made what for American Reunion? >>

“I think Finch is a nice kid, but I don’t think (Stifler’s mom) ever dated a nice man,” Coolidge continued. “There’s something really great about seducing a young guy that hasn’t really had much experience, but to seduce an older guy that hasn’t had a lot of experience is a great idea. It’s a really fun thing for a woman.”

“When the franchise started, he was just a regular guy coming home from work and finds his son humping a pie,” Levy said of his character. “And then his life kind of takes on a purpose. He realizes he kind of screwed up somewhere along the line with his kid and didn’t explain things properly or whatever, so he tries to help his son out in as helpful a way as he possibly can.”

“I would think he’s not the kind of guy who would probably stay single,” Levy explained. “If he’s not with Stifler’s mom, then he’s out trying to reform some hooker someplace, I don’t know. He’s had an experience with Stifler’s mom that I don’t think he’s ever quite had in his life, and how that affects him down the line, I don’t know, outside of just making him generally happier.”

By the way, this isn’t the pair’s first reunion. In addition to the American Pie flicks, they have starred together in the hilarious mockumentaries Best in Show, A Mighty Wind and For Your Consideration.