Kanye West and Kim Kardashian are dating — and this fan approves. Find out why this YouTube vlogger is trying to copy West’s swag. 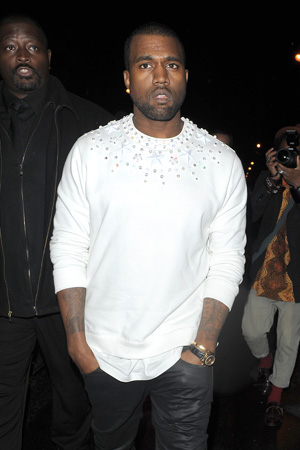 Kanye West dropped his new track “Theraflu” on Thursday morning and it quickly took hold of the web with its crazy lyrics about everything from ex-girlfriend Amber Rose to his disdain for PETA.

The biggest revelation? He admits that he’s in love with Kim Kardashian. It seems that the two are actually dating now, judging from the “leaked” information and photo opps all over New York City on Thursday.

At least one fan is really digging the relationship between West and Kardashian. He’s also a huge fan of “Theraflu” — and he just had to review it on YouTube. His review? “That is so much swag,” he says of the song. “I want to kill myself for not having that much swag.”

The fan — identified on his YouTube channel as MaximBady — also loves his hero’s take on the PETA controversy. In the song, West raps to “tell PETA that my mink is draggin’ on the floor.”

Maxim says he likes PETA and knows that they’re going to come after West for that.

“PETA will be pissed at that and they will come after Kanye with all of their goats, and heads, and chickens and all the animals, and they will just bomb it on Kanye West,” he says with a big grin and animated hand motions.

Among Bady’s other likes? Wiz Khalifa and Kardashian’s butt.

Then he jams out to the song, knocking over his television antenna in the process. No biggie for Bady, though — he’s too busy picking up swag tips from Kanye.