Grace Kelly is returning to the big screen — as played by Nicole Kidman. The Oscar-winning Aussie is taking on the late actress and princess in an upcoming film. Does she have what it takes to play the American icon? 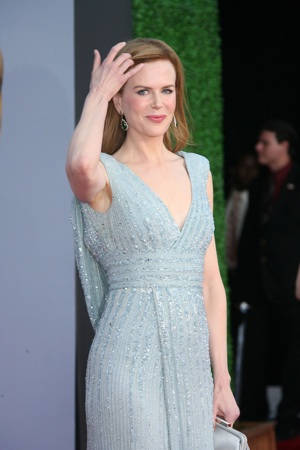 Nicole Kidman is preparing to play Hollywood royalty. She’s in talks to star in Grace of Monaco, an indie drama based on actress-turned-princess Grace Kelly.

According to The Hollywood Reporter, Monaco will center on “a six-month period in 1962 when the city-state got into a heated dispute with France, which grew tired of the petite principality being a tax haven.”

At the time, Kelly was new to her princess role and struggled to save Monaco from a coup.

The film is being compared to 2010’s The King’s Speech, which is high praise. The movie won several Academy Awards including best actor, director and picture. Kidman and crew have big shoes to fill!

Grace Kelly was an extremely popular American actress who dominated film in the ’50s. She appeared in many high-profile projects and was known for working with acclaimed director Alfred Hitchcock.

Some of Kelly’s best-known roles include Margot Mary Wendice in Dial M for Murder, Lisa Carol Fremont in Rear Window, Georgie Elgin in The Country Girl and Frances Stevens in To Catch a Thief.

In 1956, Kelly married Rainier III, Prince of Monaco and soon retired from acting to focus on her duties as princess. Nearly 30 years later, on Sept. 14, 1982, Grace died in a car accident at the age of 52.

It was a dark ending for such a bright woman.