James Cameron’s Titanic was re-released in 3D on Wednesday and it’s giving The Hunger Games a run for the money at the box office. 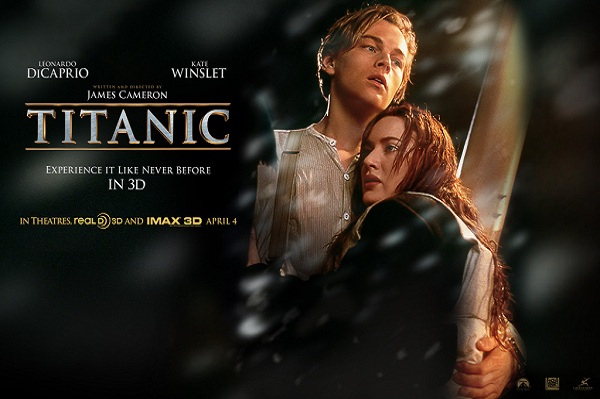 James Cameron’s Titanic is giving The Hunger Games a run for its money at the box office. Early estimates indicate a strong showing for the preview on Tuesday and re-release of Titanic in 3D on Wednesday going into the weekend. However, with Titanic’s longer running time that means less showings. According to The Hollywood Reporter, Titanic took in an estimated $4.7 million at the domestic box office Wednesday. It remains to be seen if it can take over the number one spot.

Paramount Pictures predicts a weekend total around $25 million, while some are reporting it could be as high as $30 million.

The Hunger Games has dominated at the box office the last few weeks of March, raking in over $258 million so far as of Tuesday, April 3. Wrath of the Titans holds the number two spot followed by Mirror Mirror, 21 Jump Street and Dr. Seuss’ The Lorax.

Titanic is being re-released in 3D, which was something Kate Winslet found unnerving — seeing herself in 3D digital imagery. Check out Kate in a gorgeous dress and more photos from Titanic’s London premiere.

Titanic started the trend of bringing in girls (in particular tween girls, the Twi-hard type fans) to the theater in droves in 1997. This attendance trend is being repeated with the Twilight successes and now The Hunger Games. Cameron hopes to catch a new generation of girls who may be smitten with Leonardo all over again or come back to the theater for the nostalgia that was Titanic in 1997.

Reviews are good, showing that even in 3D Titanic still delivers an emotional punch. In fact, according to Kevin S. Sandler and Gaylyn Studlar’s book, Titanic: Anatomy of a Blockbuster, the teen girl audience appeal was known by Cameron. He was always specific when discussing the film and stressing that it was NOT — in fact — a disaster film about doom and gloom. Cameron always described the film as “a love story.” Perhaps this indicates its everlasting appeal.

The film is iconic and a cultural mainstay. Americans are fascinated by this American tragedy. The film reflects immigrant issues and class issues in a particularly American way. It holds so much fascination over our imaginations, it even made an appearance as a crucial plot element in the revered ratings hit, the BBC series Downton Abbey.

Cameron believed in the film, even when nobody else did and shot it over 100 days in massive water tanks in Baja, Mexico. Cameron’s love for the water is the stuff of dreams and legends: His 1989 film The Abyss explored alien life underwater and now it’s also apparently the stuff of scientific exploration. Cameron successfully dove a few weeks ago to the bottom of the Mariana Trench, the deepest spot on Earth — deeper than Mt. Everest is high.

Titanic 3D will be more heaven than tragedy for many as they re-live the thrill of seeing it again since its 1997 release, or view it anew in 2012. Cameron is the genius filmmaker who can do no wrong, it seems. What’s next? Rumors are he expressed interest in directing the prequel for Ridley Scott’s must-see film of the summer: Prometheus.

I have my ticket already.