Are they or aren’t they? Kim Kardashian denies she is dating anyone at the moment, but the lyrics to a new Kanye West song say otherwise. 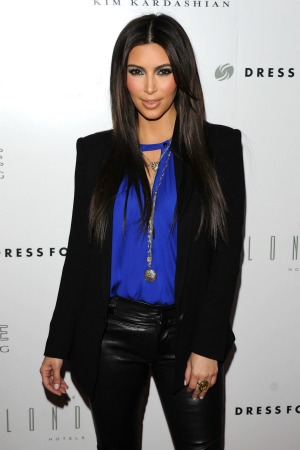 Are Kim Kardashian and Kanye West dating? The rumor has been out there for months, but Kim continues to insist that she is single and definitely not ready to mingle. Now the lyrics to a leaked Kanye song may finally reveal the truth: That Kim has been lying through her teeth the whole time.

In the May issue of British Cosmopolitan, Kim explained how not only is she so not ready to date yet (her divorce from Kris Humphries is still pending and getting ugly), we’re all big dummies for believing the rumors of any hookups.

“I’m not even close to dating again!” she insisted to the mag. “And it’s just ridiculous when I’m linked to people I’ve never met or heard of… I’ve learnt to not care.”

“There are always going to be ridiculous rumors,” she protested. “I’m just going to work on me for a bit.”

Apparently Kanye West is also working on her, because what she said is totally contradictory to what Kanye himself says. In fact, he even wrote a song about their hot and heavy romance! In “TheraFlu” he specifically references Kim and the fact that he’s in love with her — and has been since right around the time she met her ex.

“I’ll admit I fell in love with Kim around the same time she had fell in love with him,” he raps, referring Humphries. “Well, that’s cool, baby girl, do your thing; Lucky I ain’t have Jay drop him from the team.” (Kanye’s protégé Jay-Z is part owner of the New jersey Nets, for whom Humphries plays.)

Don’t expect this maybe-couple’s romance to play out in front of the cameras, though. Despite the fact that both are total fame whores, Kim said that one TV romance was more than enough for her.

“I don’t think I would stop doing the reality show — I love doing it — but I wouldn’t have another relationship shown on the show,” she told the magazine. “That might be too personal, especially when you’re just meeting someone. It’s taught me to be more private.”

Except on Twitter, where she regularly posts half-naked pictures of herself.

The Buzz: Kim Kardashian & Kanye West are totally a couple