It’s been a long month since Invisible Children unveiled their KONY 2012 campaign to capture Ugandan warlord Joseph Kony. Now, the organization is responding to the criticism with another inspirational (and super-long) video. 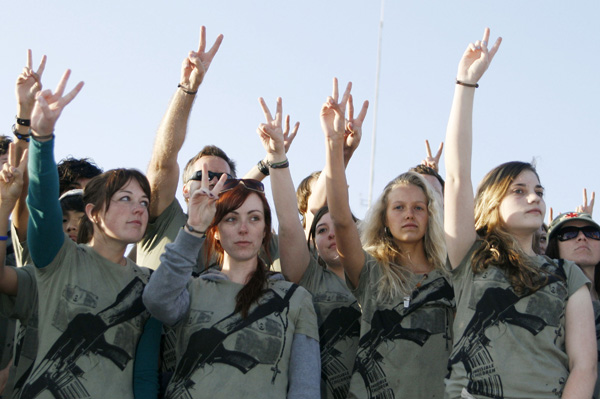 Invisible Children debuted their Kony 2012 campaign last month to make Ugandan warlord Joseph Kony “famous.” The video quickly went viral with millions of views and tons of chatter, both for and against the mission, by famous and non-famous people alike.

Then another crisis happened: The voice behind the video, Jason Russell, was detained in San Diego for “interfering with traffic, banging his hands on the sidewalk, yelling and screaming,” according to police.

Christopher Meloni is on a one-man quest to stop Kony >>

“A month ago, we launched Kony 2012 with the goal to make Joseph Kony famous in order to bring his crimes to light, and people all around the world are now calling for his arrest. Beyond Famous is a call to turn global awareness into informed action,” he says in the 19-minute video.

However, the sequel lacks the spark of the first one, something Keesey recognizes.

“It’s always hard to keep the momentum on an issue like this, especially because the majority of people watching this have no relationship, no connection to something that is happening thousands of miles away,” he said. “Our goal is just to create compelling stories to bring back what the point is — which is right now there are people living in fear of violence and being attacked by the LRA [Lord’s Resistance Army] and we need to be reminded of that.”

The only thing they didn’t address? Russell and his public meltdown. The filmmaker isn’t featured in the video and is reportedly still getting treatment for his psychotic break.

“Doctors say this is a common experience given the great mental, emotional and physical shock his body has gone through in these last two weeks,” his wife, Danica Russell, said in a statement last month. “Even for us, it’s hard to understand the sudden transition from relative anonymity to worldwide attention — both raves and ridicules, in a matter of days.”

Do you believe in Invisible Children and the Kony 2012 mission?