Snooki is getting fierce over claims that her baby daddy is cheating. Read on to find out who Jionni is reportedly stepping out with, and what Snooki has to say about it. 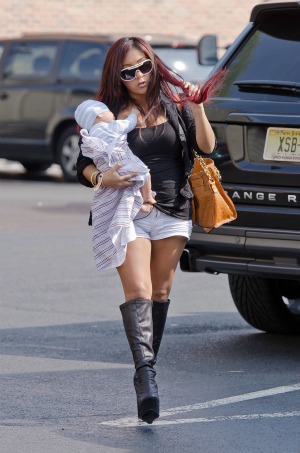 Is Snooki heading for a heartbreak? The pregnant star of The Jersey Shore says she is deeply in love with her baby daddy Jionni LaValle despite claims that he’s cheating with an ex — and if you give her grief about it she will cut you.

An insider claims to have info pointing directly to an unfaithful Jionni and shared it with the National Enquirer.

Snooki practices with a baby doll >>

“Poor little Snooki is caught up in a love triangle that she knows nothing about!” the source said.

“He’s engaged to Snooki but go­ing behind her back to contact Erica, calling and texting her,” charged the source. “He’s cheating on Snooki.”

“Erica says Jionni was carry­ing on a ‘hot and heavy’ affair with her right up until last fall,” confided the source. “She re­cently told a friend, ‘We were seriously hooking up all sum­mer and Jionni considered me to be his girlfriend — not Snooki!'”

So is it true? Jionni isn’t talking, but Snooki sure is.

“The story is 100 percent false, ridiculous and deserves no other comment. They should stick to reporting on alien sightings,” Snooki’s rep told Celebuzz.

Snooki herself went on Twitter to defend her man. When asked about the cheating rumors, she said, “No lol. Tabloids are so desperate and disgusting.”

“He makes life better. Makes me feel normal and cracks me up. He’s my BFF,” she wrote.

And anyway, she doesn’t have to explain her relationship to anyone. As she told Us Weekly when she broke the baby news, “I don’t care what anybody thinks. As long as I know I’m ready and he’s ready, I don’t have to talk to anybody about it.”

And she sounds pretty serious. “I’ll cut a b**** if you mess with my baby!” she Tweeted.

28 mins ago
by Caroline Greelish