Tori Spelling said her most recent pregnancy was far from planned — in fact, the whole thing can be blamed on not following doctor’s orders. 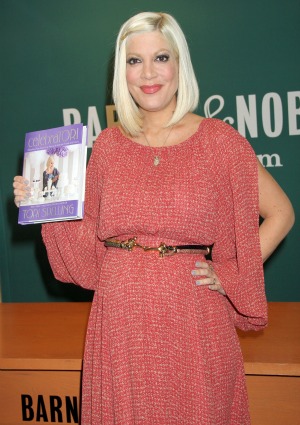 “All my friends keep asking me [if it was planned] and I’m like, ‘Seriously? Hattie was one month old. Do you think it was planned?'” Spelling said at the launch of her new book CelebraTori in NYC Tuesday. “I was up all night with feedings.”

Basically what happened was that Tori’s insatiable lust got the best of her.

“The doctor said, ‘Wait six weeks [to have sex],’ and Dean was like, ‘They tell everyone that.’ We didn’t wait that long with Stella or Liam. I was like, ‘Well, I don’t want him to think that the sex is going downhill,’ so now we’re on baby number four.”

While Tori and Dean are super psyched about the unexpected addition, there are at least two people in the house who couldn’t care less: their oldest kids Stella and Liam. She said when she told the kids the news, “It was as if we had said, ‘Oh we got milk today. We brought home milk today and put it in the fridge and you can go help yourself to a glass.'”

The newest little Spelling-McDermott is due in September.

Read on for more Tori Spelling