Camille Grammer was caught on tape saying some pretty nasty stuff to her boyfriend’s baby mama — but was she totally set up? Read on to find out how it all went down. 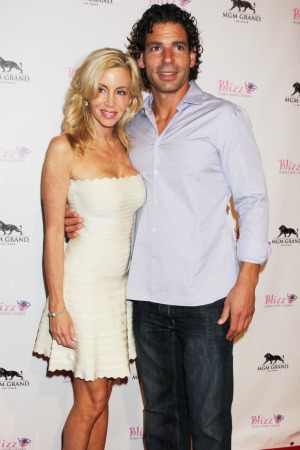 Camille Grammer is having a tough couple of weeks. First she was let go from The Real Housewives of Beverly Hills, and now she is being hung out to dry by her boyfriend’s baby mama Lisa Chynoweth.

In an explosive taped phone conversation, Grammer appears to be throwing around some pretty heavy threats at the mother of the 5-year-old son of her man, Dimitri Charalambopoulos (say that five times fast).

“If you go to the press, I have lawyers that are beyond what you can imagine and they will pull stuff on you and you will be so mortified about your life and your family and what you have done,” Grammer is heard to say on the tape. “You don’t want to do that to Marcus. I will desecrate you, believe me, and that I can do, so be careful what you say and what you do because my defamation attorneys are huge… They will hunt down and research every nook and cranny of your life.”

It was initially unclear what brought on Grammer’s little temper tantrum, but a source told RadarOnline that Chynoweth spent hours goading Grammer and only recorded the snippet of conversation after she had been provoked.

Bravo to Camille Grammer: Don’t let the door hit you >>

“Lisa is the one that called Camille about a month and a half ago and she had a laundry list of issues she needed to address,” the source revealed. “Camille was very gracious in the beginning of the conversation and just let Lisa talk. Camille had a lot going on in her life because she was still in a custody dispute with Kelsey.”

“Towards the end of the conversation, Lisa told Camille that the press had been calling her and brought up Camille’s children. Lisa knew about the custody battle and threatened to insert herself into that situation. Camille was provoked and reacted as any mother that loves her children would, period. Camille didn’t threaten Dimitri’s son, Marcus, she was simply saying that no child should have to deal with the fallout of their parents feuding.”

“Dimitri wasn’t with Camille when the phone call was made and they both find it extremely interesting that only a snippet of the conversation was recorded,” the insider said. “Lisa didn’t record the portions of the phone call when Camille praised what a great dad Dimitri was and what an amazing little boy they were raising. Lisa purposefully recorded when she had provoked Camille and attempted to use it against her.”

Tell us: Are you on Camille Grammer’s side?