Madonna is officially at the top of her game. But is her big comeback attributed to her new dance hits or all the recent scandal? At age 53, does it matter? 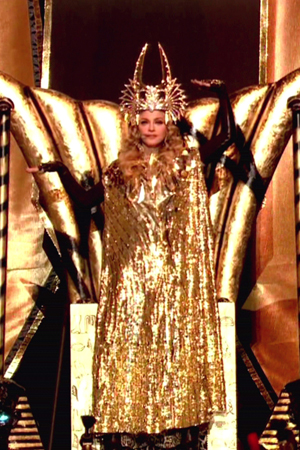 After years of musical hibernation, Madonna is back — bigger and better than ever. Earlier today, MDNA debuted at the very top of the Billboard 200. According to The Hollywood Reporter, her 12th album will have the biggest first week of the year, despite a controversial commercial and plagiarism accusations — only a few of the scandals attached to her name over the past few months.

However, it is only coincidental that the pop icon was surrounded by such a buzz just before her comeback album dropped. Because when you’re 53, you don’t need to be scandalous to sell albums anymore.

“All those things didn’t start with us,” testified Madonna’s longtime manager, Guy Oseary, in reference to a permanent ban from Piers Morgan and a Twitter scold from EDM artist Deadmau5. “It’s just part of the gig.”

“Anyone who can have a career as long and as healthy, strong and consistent as Madonna’s, that’s a once-in-a-lifetime artist,” added Interscope Geffen A&M chairman Jimmy Iovine. “It’s incredible what she’s done. You can have an act earn money like her, but you can’t have a career like that.”

Madonna’s team asserted that the middle-aged musician isn’t too old be outrageous in both her personal life or in her dance lyrics. “Didn’t Lionel Richie just make a country album?” argued Oseary. “No one is giving him a hard time… and God bless him — I love Lionel and should be able to do what he wants to do, like Madonna should, too. Both are having success and I applaud them. If you don’t like it, don’t buy it. The ageism criticism is getting old. It’s, like, let’s just talk about the music. Do you like it?”

Well, her manager already knows the answer to that question. “Dance music is Madonna’s base,” he said. “People are really digging it… [the EDM community] is giving the love back. It’s her 12th album and the same story she had 30 years ago. That’s an amazing accomplishment.”