It’s been a long time since we’ve seen the residents of Bon Temps. And thankfully, the wait is over. HBO has given True Blood an official return date and it’s not alone. The network has also confirmed the premiere for the highly-anticipated drama, The Newsroom. 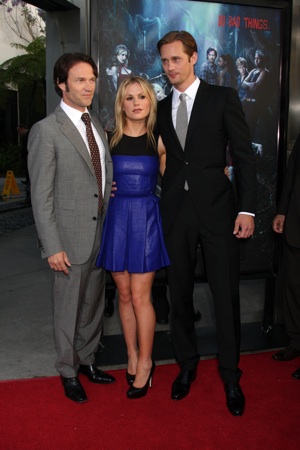 HBO is having a great week. Following the premiere of their hit drama Game of Thrones, they’ve unleashed even more TV goodness.

The network will air all-new episodes of True Blood starting Sunday, June 10 at 9 p.m. ET/PT. The 12-episode season will have more sex, blood and plenty of new faces. The last time we saw the show, witches had left a trail of dead bodies in their wake.

This season, the Vampire Authority will make their presence known, and the infamous Russell Edgington (Denis O’Hare) may return from his [cement] grave. Also, Sookie (Anna Paquin), Bill (Stephen Moyer) and Eric (Alexander Skarsgård) are still reeling from their official break-up.

On a less fantastical note, HBO and Oscar-winner Sorkin have teamed up for a hard-hitting drama called The Newsroom. The series centers on a cable news anchor, his new executive producer, his newsroom staff and their boss. Together they set out on a patriotic and quixotic mission to do the news well in the face of corporate and commercial obstacles and their own personal relationships.

Are you ready for more True Blood? Are you excited about The Newsroom?