Katy Perry is taking a page out of the Justin Bieber playbook with her upcoming 3D concert movie Katy Perry: Part of Me, out this July. Perry’s giving fans a chance to be the film. Want to join? Read on to find out how. 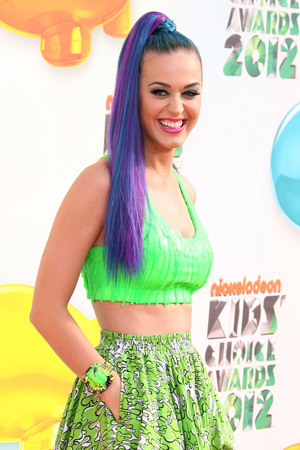 The movie will follow her on her recent California Dreams tour and give fans a backstage look at her life that will “reveal the highs and lows, and nuts of bolts of this extraordinary ride. I promise you, after seeing this film, you will truly know me,” she said.

Will it be as successful as Bieber‘s film? We’ll see — Perry’s fans are intense, but not as driven as the Biebs’. However, she’s setting her movie apart with a special contest that will give one fan the opportunity to have a role in the film.

Perry didn’t elaborate on how the winning fan will be in the film, but we’re going to assume it’s in some sort of montage about Perry’s life and work.

And how does the blue-haired singer feel about her fans?

“Thank you so much for believing in my weirdness,” she tells fans in the film trailer. You’re welcome, Katy.

Watch the Trailer for Katy Perry’s Part of Me 3D