Want to see Kris Humphries almost in the nude? No? Well, too bad — he’s taking it (almost) all off in a new magazine photo shoot. Prepare yourself. 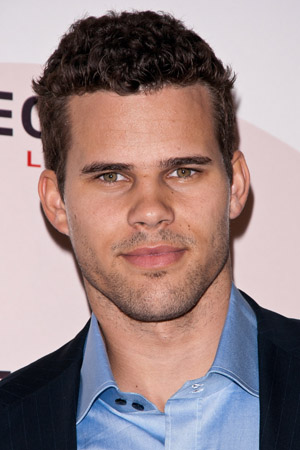 You’re either going to love this, or really, really hate this: Kris Humphries is dropping his pants for a new photo shoot with WestEast magazine — and he’s wearing leather. Lots and lots of leather.

The in-your-face shots — available to view here — are definitely a side of the New Jersey Nets baller that we’ve never seen before. Also, we’re not really sure we wanted to see this side of him, either.

The concept behind the New York City photo shoot is obviously that Humphries is fighting a battle against the media, the “haters” and — of course — his ex-wife, Kim Kardashian. The divorce battle between the two is far from over, mostly because Kardashian’s Kamp claims that Humphries is trying to drag out the divorce to spite her.

“He’s doing anything he can to get her attention,” a Kardashian Konfidant told US Weekly in the new issue. “She would grant a divorce in a second. But he won’t sign the papers. He won’t let go.”

According to sources, the baller wants Kardashian to admit that their whole marriage was a fake. However, that tale of revenge is far from the truth, according to his rep.

“The allegations that he’s seeking revenge with this photo shoot are false and we remain adamant that personal issues will be handled by his legal team and not in the media.”

As for the rumors that he’s trying to pawn off his black diamond wedding ring? Not true.

“He would never do that, it’s sacred to him, just like his marriage was supposed to be,” a friend told HollywoodLife.com. “He would never auction anything off!”

To be honest, we’d like to auction off our brains if it meant getting rid of the mental image of Kris Humphries in leather skivvies.