Drew Barrymore stepped out this week sporting a tell-tale pouch around her midsection. Is she sporting a food baby, or the real deal? 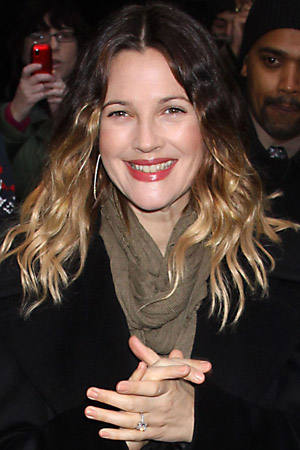 Can we expect a baby flower child within the next several months? It’s looking more and more the case, thanks to these photos that surfaced on the web Wednesday. In the shots, newly-engaged actress Drew Barrymore is shown sporting a small bump around her midsection.

This speculation isn’t coming out of nowhere, though: The actress — and her hubby-to-be, Will Kopelman — were spotted outside a doctor’s office in early March clutching what looks like a sonogram photo.

At the time, a source told People that she’s looking forward to being a mother.

“If and when I have children of my own I would be a different kind of parent. I have learned what not to do. I know I would have a great relationship with my kids,” Barrymore reportedly told the U.K. gossip rag The Sun earlier this year. “The strange thing was, when I bought my first house in my early twenties my dad moved into the guest house — an irony, because we had never lived together.”

We’ve reached out to Barrymore’s rep to get comment.

In the mean time, we’re going to keep our eyes trained on her middle (we’re not creepy, right?) to see if it grows more. We’ll soon find out the truth, much like when Jessica Simpson tried to keep her pregnancy quiet even though it was quite obvious she was preggers.

“I think that if you’re happy on the inside, that is the most important place to start with looking and feeling your best,” Barrymore told SheKnows in February. We loved her advice — and you know who else would love that advice? Her future child.

Does Drew Barrymore look pregnant to you?