Rihanna knows full well the public doesn’t approve of her recent collaborations with abuser Chris Brown — she just doesn’t care. The singer tells Elle magazine why she considers her violent experience to have been liberating. 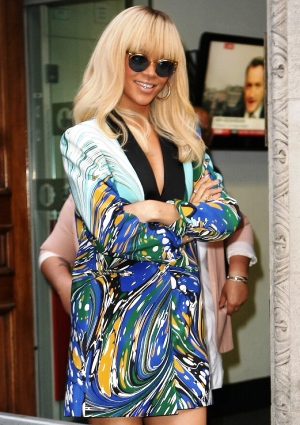 When it comes to Chris Brown, Rihanna is going to do whatever Rihanna wants to do. No amount of public outcry over why she’s reconciling with the ex-boyfriend who put her in the hospital, bruised and bloodied in 2009, is going to sway her resolve to make up her own mind.

Speaking of the public learning about the night Chris Brown physically attacked her, Rihanna recently told Elle magazine, “It gave me guns. I was like, well, f***. They know more about me than I want them to know. It’s embarrassing.”

Rihanna strips for self esteem >>

There was, however, an unexpected upside to Rihanna’s private pain being put into the public light. She explained, “But that was my opening. That was my liberation, my moment of bring it… Now you know that, so you can say what you want about it. I don’t have anything to hide.”

Since the 2009 incident Rihanna and Chris Brown have reconnected, and collaborated on a pair of singles — much to the shock and horror of some.

“The bottom line is that everyone thinks differently,” Rihanna said of the backlash over her decision to reconcile with Chris Brown. “It’s very hard for me to accept, but I get it. People end up wasting their time on the blogs or whatever, ranting away, and that’s all right. Because tomorrow I’m still going to be the same person. I’m still going to do what I want to do.”