We thought Hilary Duff would be a super-cool mom — and we were right! Check out the photos she tweeted of her two-week-old baby boy! 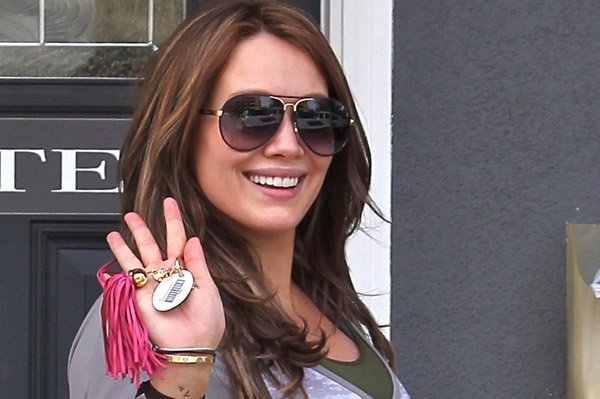 It sounds like Hilary Duff is taking to motherhood very well, thankyouverymuch! The 25-year-old actress showed off a couple of pictures of two-week-old Luca Cruz Comrie on Twitter Tuesday afternoon. The verdict? We give him five “awwwws!”

“Baby Luca, 2 weeks old :),” she tweeted, along with a photo of her bouncing baby swaddled in a blanket. Everyone loved him, so she followed up with another picture.

“Oh no! The flood gates have opened! Proud mamma on the loose! i can’t help myself,” she added. We can’t blame her — he’s totally adorable.

Her recent Twitter updates have been filled with little love notes about Luca.

“1st outing complete with no tears! Made it home early…just in time to feed Luca. figuring this motherhood thing out! Yay! A grown up din;),” she tweeted over the weekend. “4 am… Sleepy eyed. Feeding baby.. whew this job is no joke!”

“Luca fed! Mamma fed! Time to do it all again in 2 hours! Oh how life has changed! Lol In such a wonderful way :)”

She was even spotted out-and-about over the weekend, looking healthy and glowing. The svelte actress is even easing back into a workout routine, but she’s not overdoing it.

“20 minutes on the elliptical seems like an eternity!!! What the hell….,” she joked on Twitter. “Did a little Pilates today. Felt so good to stretch! Little man had a visit with grandma and did so well! I’m lucky to have my fam so close :).”

And we’re sure she’s thankful for that, especially with a supportive sister like Haylie Duff.

“Let’s all send some xoxo’s to my seester she is doing such a fantastic job w Baby Luca! Proud of you sis,” Haylie tweeted last week in support of her sister.

Keep up the great work, Hilary!

50 mins ago
by Danielle Sinay