Ryan Seacrest is headed to NBC this summer to cover the Olympics! Can the American Idol and radio host bring renewed luster to the games’ ratings? 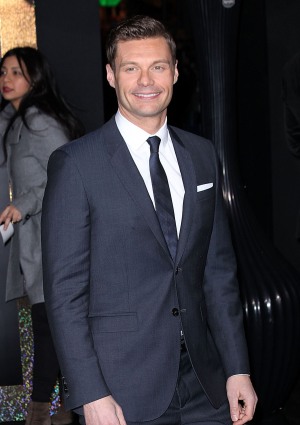 Ryan Seacrest is headed to NBC for the 2012 Summer Olympics, but not to take Matt Lauer‘s job — at least, not yet. The 37-year-old stopped by The Today Show on Wednesday morning to let the “big NBC announcement” that had been teased for days out of the bag.

“I’ve worked with the E! network for years, and NBC/Universal and E! are in the same family,” Ryan Seacrest explained to Matt Lauer. “The plan is for me to join the NBC family and continue to have a role at the E! network. The first assignment will be to join the prime time team for the Olympics on NBC.”

Gossip over Seacrest’s NBC contract had indicated he may have been in talks to replace the veteran host of The Today Show.

“Oh, they didn’t tell you?” Seacrest joked to Lauer of the rumors. “I see you doing this for as long as you want to, so maybe the question is, how long will you be on The Today Show?”

“I think you’d be great at this job,” Lauer, who has hosted the morning show for 15 years, offered.

“There’s nobody better than you,” Seacrest politely complimented in return.

Matt Lauer, whose position is securely intact at least until the end of the year when his contract is up, still jokingly insisted he wanted names, dates and additional details of the American Idol host’s contract talks.

“They were mostly about filling in to do the weather,” quipped Seacrest.

Joking aside, Ryan Seacrest revealed his Summer Olympics gig with NBC is expected to be the first of “a lot of fun things” he will be doing at the network.

Do you think Ryan Seacrest is a good fit for NBC and the Summer Olympics?