Community creator Dan Harmon is calling a truce in his war with Chevy Chase after a series of events left the actor steaming. Find out what happened — and how Harmon is trying to get his star back. 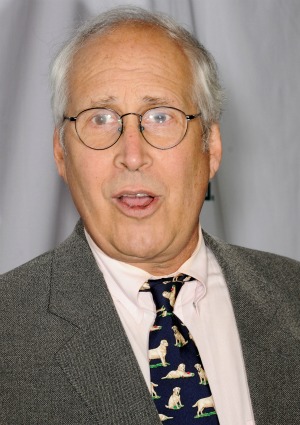 It’s a TV feud worthy of Charlie Sheen and Chuck Lorre. Chevy Chase and Community creator Dan Harmon are totally at war — and now Harmon is practically begging for forgiveness in the hopes his star will return to the show.

It all started last season, when the two had a disagreement over the script. Chase hated it, Harmon refused to change it, and Chase walked out leaving the scene unfinished.

Just days later the actor showed up at the Community holiday party with his wife and daughter in tow — and Harmon decided to take the opportunity to mock him, even trying to get the rest of the crew to join him in chanting “F*** you.”

Needless to say, this did not sit well with Chase, who left Harmon a ferocious voicemail calling him a “fat f***” and a “god damn a******” who can’t write.

Upping the ante, Harmon played the voicemail as part of a performance at an L.A. comedy club because he thought it was hilarious — but the joke blew up in his face when the whole thing went public, making him look like an even bigger jerk when he mocked Chase for allegedly being drunk when he made the call.

Now Harmon is at least having the courtesy to apologize for that last stunt, knowing that it’s quite possible Chase could refuse to return to the show if he doesn’t eat his words.

In a blog post Harmon wrote, “It was in that venue, months ago, that I made the horrible, childish, self-obsessed, unaware, naive and unprofessional decision to play someone’s voicemail to me. He didn’t intend for 150 people to listen and giggle at it, and I didn’t intend for millions of people to read angry reports about it. I was doing what I always do, and always get in trouble for doing, and always pay a steep price for doing.”

“I was thinking about myself and I was thinking about making people laugh. I was airing my dirty laundry for a chuckle,” he explained, “[and] the giant mistake I made was involving someone else in that game of Russian roulette, someone that didn’t have an opportunity to say ‘yeah, hilarious, let’s do this.’ That was a dumb, unclassy, inconsiderate move on my part. I’m very sorry it’s reflecting poorly on the show.”

“It’s important to me that you not mistake this for someone thinking they’re making it better, or explaining that they’re actually a swell person. I’m explaining that you’re right, I’m a bonehead, and it sucks, it blows up in my face on a regular basis.”

Chevy Chase has yet to comment on the situation.