Courtney Robertson who? Lindzi Cox might have been the runner up on the last season of The Bachelor, but she is so ready to move on from Ben Flajnik — not to mention stoked about Emily Maynard being on The Bachelorette. 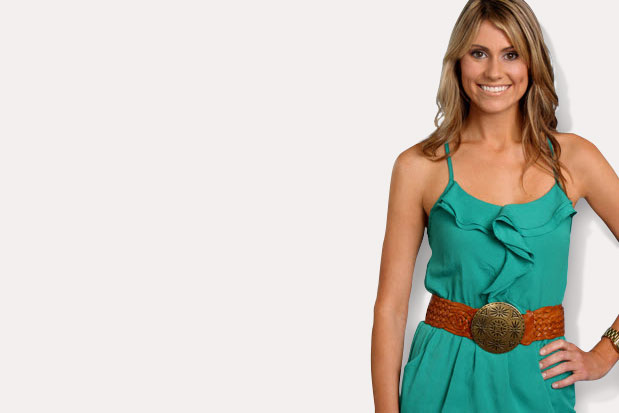 The lindzi
you never met

Courtney Robertson who? Lindzi Cox might have been the runner-up on the last season of The Bachelor, but she is so ready to move on from Ben Flajnik — not to mention stoked about Emily Maynard being on The Bachelorette.

Here, Bachelor alum Ashley Spivey talks to the equestrian beauty about moving on, makeup meltdowns and of course, skinny-dipping.

Most people know her as the girl who dodged a bullet, but Bachelor fans remember Lindzi Cox as the girl who made a lasting first impression on Ben Flajnik by riding up on a horse. Lindzi often got lost in the dramatics of the season and many fans felt that we didn’t really get a chance to know her, even though she made it to the final two. I decided to have a chat with her to find out what she wishes people would have seen and what she thought of the infamous skinny-dipping incident!

The Bachelor: The good, the bad and the ugly

What was your favorite thing about Ben?

When I was with Ben, we were able to be serious but also joke around and have a really good time. He did a fabulous job of making me feel like there weren’t a bunch of other ladies in his life.

It seems that he fell hard and fast for the beautiful Courtney and just didn’t give some people the chance that they may have deserved with him. I don’t think I can fault him for this, but I just wish that I realized this earlier on.

Was Ben a good kisser?

Ben was a great kisser, but he had a ton of practice with all 25 of his girlfriends, so I would expect nothing less!

The Bachelor finale: 10 Moments where I was totes like WTF?! >>

5 facts you didn’t know about Lindzi:

Ooooh, I want them both. Seriously, Ryan, Ryan, if you’re reading this, call me!

-If it were the end of the world?:

… I would probably freak out

What do you wish people would have gotten to see this season that they never showed?

I don’t think that people got the full Lindzi-ness of my personality on the show. Since I didn’t get myself all caught up in any of the silly drama or anything, I almost came off as a little boring. I promise I am not boring at all!

Is there something you’re glad they didn’t show?

My booty while I was laying on the bed in Switzerland… oh wait… they did show that! That was awkward in the office that next day!

Were you upset that you didn’t get to go on the After the Final Rose?

I really wasn’t upset about not being on the ATFR. I am in a really great place in my life and there was really nothing that had to be said to Ben. I fully respect his decision and it just seems like he and Courtney have enough things to deal with. I don’t need to get in the mix and stir things up.

Can you give us a little tidbit about your overnight date with Ben?

It was kind of weird being alone with him for those first few minutes! I was so used to people being around that when I was alone with him I felt like I was breaking the rules, or something!

I would feel really weird calling Chris sexy, because he is sort of that big brother-like figure, and he is married and has the most beautiful family!

Were you ready to accept a proposal from Ben?

In hindsight, I don’t think I really was ready to accept a proposal. There were moments where I could see myself with Ben, but looking back at the big picture, I think things ended up how they were supposed to and I am really happy about that.

When you watched this past season, did anything really upset you?

Ben’s reaction to Emily trying to give him a heads up about her observation of Courtney got me a little riled up while I was watching the show. Emily is my homegirl so it was frustrating to see him blow her off in defense of Courtney. Speaking of Courtney, she did not really upset me, but watching her this season did kind of blindside me. I thought a lot more of her as a person and really liked her, so to see her just make one rude comment after another towards my girlfriends and me was a bit hurtful.

Bachelor‘s Courtney Robertson trotting over to Dancing with the Stars? >>

If you could switch places with any girls in the house, who would it be? 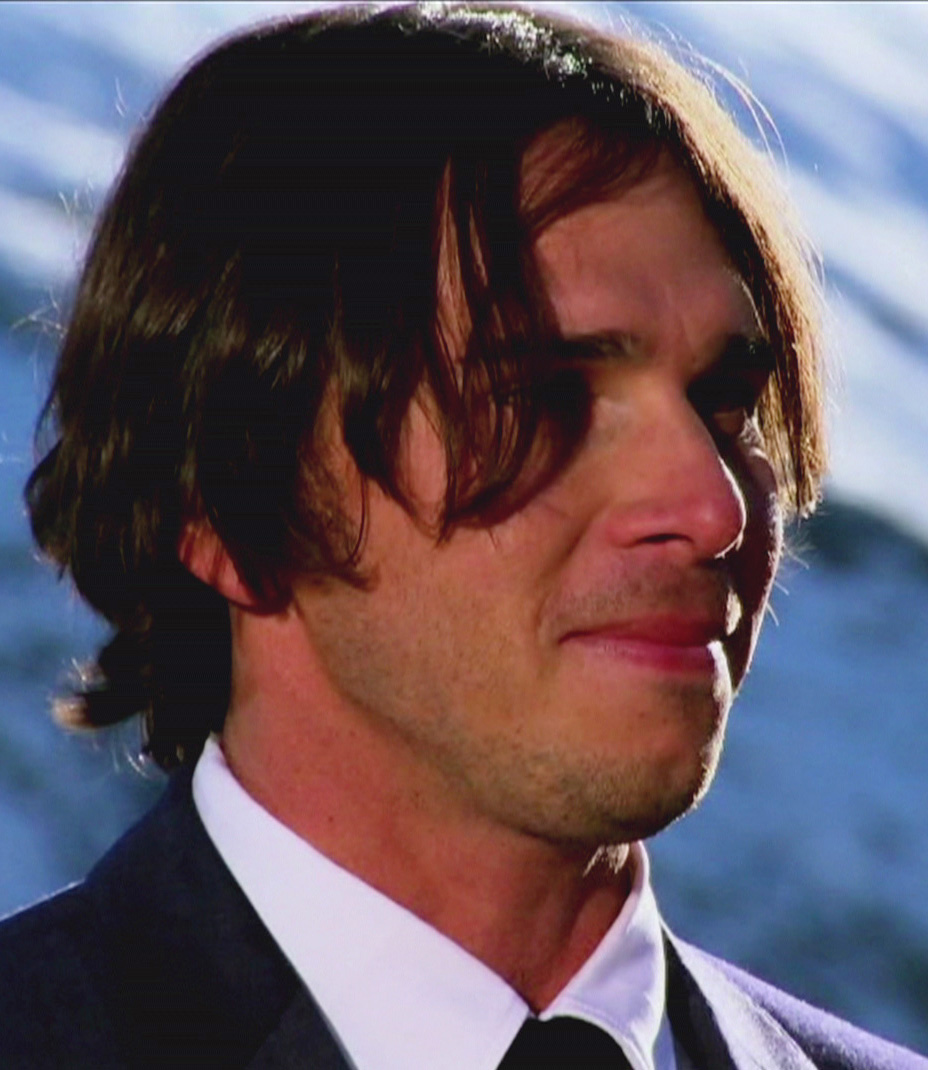 “I don’t want to say I hate [Ben’s hair], but it’s definitely not really my style preference,” Cox said.

If you could be on any other season of The Bachelor, which season would you pick?

Andrew Firestone’s season! He is so dreamy! I was still in high school when his season was on, though, so I might have been just a tad young for him ;).

Who did you hope the Bachelor would be?

I had the biggest crush on Ames, so I was hoping for him!

If you had learned about the skinny-dipping incident after it happened on the show, would you still have stayed in the competition?

I think I would have stayed, but I would have made sure Ben was on his best behavior with me after that! While I don’t think that was the most admirable move Ben made in this season, it’s sort of what I signed up for to be “competing” with the other girls and Courtney just took her game to a whole new level.

What did you want to say to Ben after you saw the skinny-dipping episode?

There wasn’t anything I really wanted to say to him. I had already had my closure, so there was nothing more to say.

Would you ever go skinny-dipping?

I would absolutely go skinny-dipping! However, when there are cameras around, that is where I draw the line and keep clothes on. There is a time and a place for shenanigans like that one, and in my opinion that was not appropriate.

On her makeup musts

What is one beauty product you can’t live without?

What self-tanner do you use?

You said that you weren’t very comfortable putting on makeup during the show — do you feel more comfortable now? 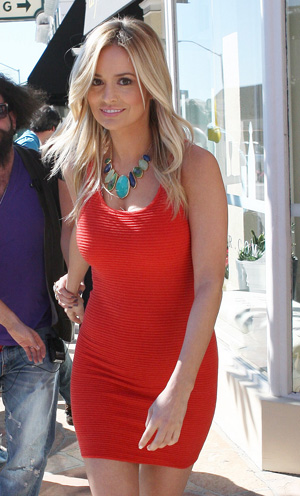 Emily Maynard will star on the next season of The Bachelorette.

I don’t think I wasn’t comfortable with makeup, I just get easily flustered. After the show I got more makeup anxiety, thanks to seeing myself week after week on High Def TV ;). That HD is a blessing and a curse I tell you!

Are your eyebrows and eyeliner tattooed on?

Yep! That rumor is correct, they are permanent! It’s been quite a few years though and it has pretty much faded away completely, but I would do it again for sure!

What do you think about Emily Maynard being the next Bachelorette?

I wish her all the best and hope she finds happiness!

Trista Sutter to Emily Maynard: Smell all the roses >>

Do you think ABC is going to guarantee a love story after this past controversial season?

I do think they can guarantee a love story. Everyone’s love story is different and from what I’ve seen of Miss Emily, she’s really in it to find someone.

Do you hope she doesn’t pick some great guys so you could possibly do Bachelor Pad with them ;)?

If I have the opportunity to do Bachelor Pad, I would absolutely hope she leaves at least one good catch for me ;). I’m excited to see the men of Emily’s season!

The Bachelorette premieres Monday, May 14, at 8/7 p.m. central on ABC.

Photos courtesy of WENN and ABC