Season 5 of Giuliana & Bill premieres tonight on the Style Network! The Rancics warn viewers about what to expect of the emotional yet exciting episodes. 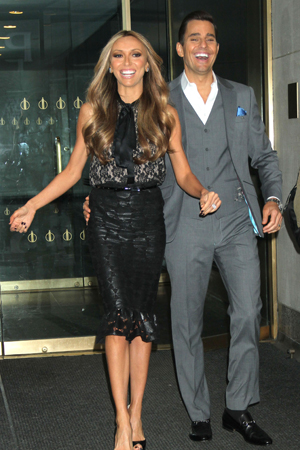 When tuning into Giuliana & Bill tonight, proceed with caution — this season will not be an easy one to sit through.

“I watched it for the first time the other night, and it was hard to watch,” said Giuliana Rancic to The Hollywood Reporter. “They told me, ‘You should watch it before it airs.’ And it’s the first time in five seasons that I haven’t wanted to watch an episode, and I just didn’t want to relive it.”

Bill Rancic added: “Over the last five seasons, we’ve tackled a lot of issues and really put into the forefront some things that a lot of couples deal with, but don’t talk about. And I think in this particular case, if we can get one girl to go out and get a mammogram and get checked, then we did our job, you know? So I’m very proud of it. I’m proud of Giuliana and it’s definitely going to open up a lot of eyes.”

They hope the show inspires viewers to take charge of their own well-being. “It is something that I hope women will be inspired by in terms of caring about themselves, putting themselves on their own to-do list and really caring about their health,” she explained.

The season’s not all about Giuliana’s battle with breast cancer, though. “We also open up a restaurant this season in Chicago,” teased Bill. “We brought back all of her mom’s recipes from Naples, Italy, and we’ve got a great chef that we brought onboard. He’s our partner. It’s called RPM Italian and it’s a 10,000-square-foot restaurant that we take the viewers from the origination of the idea to the construction to the hiring of the employees to the grand opening and beyond.”

Season 5 of Giuliana & Bill premieres tonight at 8 p.m. EST on the Style Network.