Last week, Jaleel White dismissed rumors that he beat up his ex-girlfriend. However, fans are wondering if he really does have an anger management problem after he allegedly freaked out on his Dancing with the Stars partner Kym Johnson before Monday night’s episode. Find out what happened. 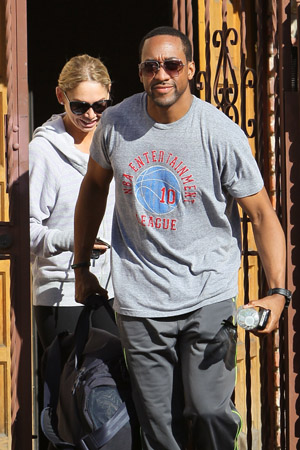 Jaleel White’s baby mama accused him of domestic abuse in a magazine interview last week, leading the Dancing with the Stars contestant to release a scathing statement against her. However, we’re learning that he might not beat up his girlfriends, but he does have some anger problems.

The actor formerly known as Steve Urkel reportedly blew up at his partner, Kym Johnson, on Monday after he stepped on her foot, according to People.

“Jaleel definitely was out of line,” a source told the magazine, adding that DWTS pro Mark Ballas and fellow contestant Donald Driver had to calm him down. “Both Mark and Donald wound up having words with him,” the source added, “mostly trying to get him to realize that he needed to just get a grip already.”

Why the meltdown? White was upset at how Johnson reacted to her foot pain. “It basically didn’t have anything to do with Kym or her foot — he was just stressed out and ready to snap.”

However, the way Ballas commented on the situation makes it sound like he’s trying to work over a seriously tense situation.

“These things happen. This show is a competitive show,” the pro told reporters backstage. “Things get heated… This got severely twisted. We’ve been in the same room all night, and everything’s fine.”

White was quick to downplay everything, too.

“It was completely exaggerated,” the former Family Matters actor said before the Monday night performance. “This has been a stressful week for us, and people have stressful weeks. [Today] was horrible. I thought we got through it really well, and our dance tonight will show everyone that we really have a great connection. This is really the first week we only had four days to learn [the rumba].”

He was quick to add how stressful dancing on television can be. “They literally do not let you rehearse without a camera,” he says. “You’re watching everything, and it’s tough.”

Hey, Jaleel — it’s Dancing with the Stars, not brain surgery. Sounds like someone needs to get a serious reality check.

Do you think Jaleel White has an anger management problem?