An actor without a television? Yup, says Tim Robbins. See why he dumped the idiot box — and what other modern spy tool is next on his list. 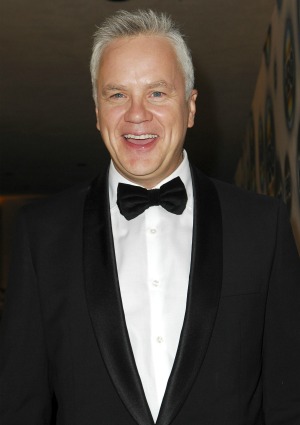 Tim Robbins is taking his experience directing a production of the play 1984 a little too seriously: He got rid of his TV — and soon his cell phone — so he can’t be tracked.

“I have done an experiment for the past three years: I got rid of my television,” Robbins told reporters in Bogota, Colombia where his Actors’ Gang production of George Orwell’s 1984 is being staged at the biennial IberoAmerican Theater Festival. “One of the things Orwell talks about in the book 1984 is this thing called ‘the two-minute hate.'”

“People go in front of their television screens and they yell at the person they object to politically,” he explained. “I realized I had been doing that for two hours every day during [the administration of President George W.] Bush. I said, ‘I’ve got to stop hating.'”

Robbins and his former long-term lover Susan Sarandon are both extremely politically active, supporting a multitude of liberal causes and loudly speaking out against injustice across the world. The play is a perfect match for his belief system, as it examines a totalitarian society in which government surveils all citizens in increasingly insidious ways.

In real life, Robbins said cell phones are one way the government is doing just that right now.

“If you have a phone, they can find you whenever they want,” he said. “I personally would like to live on a farm with a rotary phone.”

Robbins’ 1984 is one of 200 plays being staged at the festival and has been performed at other festivals in Europe, Hong Kong, Australia and the U.S.