Whitney Houston will grace the big screen one last time with this summer’s Sparkle. In the film, she’ll play mother to three singers on the verge of superstardom. Check out the first official trailer that features an all-star cast led by Jordin Sparks. 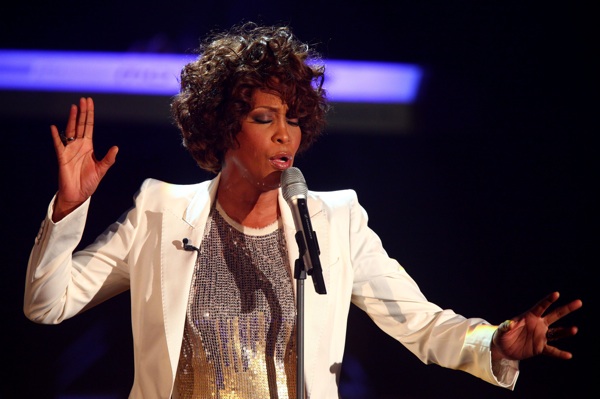 “When dreams fall apart, family holds us together.” That’s the tagline to the upcoming film Sparkle, a remake of the 1976 musical of the same name. It features Whitney Houston‘s final acting performance and stars American Idol alum Jordin Sparks as the title character.

The film follows a trio of sisters: Sparkle (Sparks), Delores (Tika Sumpter) and Sister Williams (Carmen Ejogo) as they strive for musical success in the Motown era. Houston plays their weary mother Emma, who tries to warn them about the dangers of the industry.

Sparkle‘s first trailer has debuted on Yahoo Movies, and reminds us of Houston’s vocal and acting range. During the ’90s, the singer starred in a string of mainstream films including The Bodyguard, Waiting to Exhale and The Preacher’s Wife. Before her untimely death, there were rumors that a Waiting to Exhale sequel was in the works.

Houston’s daughter, Bobbi Kristina Brown has also been bitten by the acting bug. The 19-year-old recently snagged a recurring role on Tyler Perry‘s sitcom, For Better or Worse. While giving an interview to Oprah Winfrey, Bobbi Kristina revealed that she wanted to continue her mother’s legacy.

“I still have a voice,” she said. “We’re going to do this singing thing, some acting, some dancing.”

Sparkle is directed by Salim Akil (Jumping the Broom) and opens Aug. 17.

The Buzz: Sparkle trailer is released

The Buzz – The Sparkle Trailer is Released!
The new “Sparkle” trailer released, and it’s going to be an awesome, close to home performance by Whitney Houston.