Don chased The Rolling Stones, and Betty faced a sobering medical dilemma, in an uneven installment. 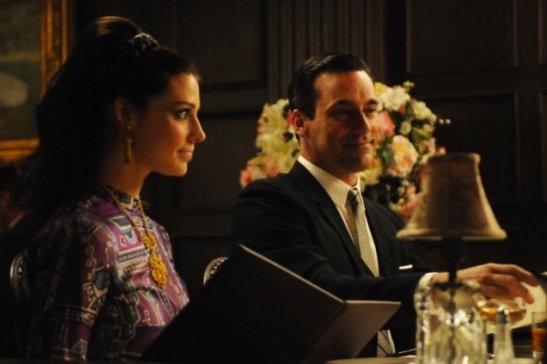 The episode, a directorial debut for series star Jon Hamm, slid Don Draper away from center stage and re-introduced audiences to his frequently chilly ex-wife. But this was not quite the Betty we’ve all come to know and tolerate: Since the end of season four, her compulsive joylessness has led her down a path of lethargy and obesity.

Though she’s no longer navigating Don’s string of lies and infidelities, Betty’s sturdier union with political advisor Henry has trapped her in feelings of complacency, shame and maybe even regret. “It’s not perfect,” Betty had once told Don of her status as Mrs. Francis. Last night we finally saw why.

“Tea Leaves” pushed Betty’s life from bland to worse, with the startling discovery that she may have thyroid cancer. Though this plot development seemed a bit more soap operatic than the usual Mad Men fare (complete with swelling music at the delivery of the heavy blow) it did add a bit of shading to the complex Don and Betty post-marriage dynamic. After all, it was Don, not Henry, who reassured Betty shortly after her doctor had conveyed the bad news. “Say what you always say,” she urged her ex-husband.

“Everything’s going to be okay,” Don dutifully responded. He even referred to her as “Betts” and “Birdie,” two terms of endearment that suggest there’s still a strong emotional connection between these two ex-spouses, whatever their domestic dysfunctions may have been. But do the combined effects of the Draper divorce, Don’s new marriage and the winds of change at Sterling Cooper Draper Pryce leave any room for Betty in Don’s life (or, more broadly, in the world of Mad Men?)

“She just needed to have something to call you about,” Megan said of Betty after the tumor was found to be benign. Perhaps Megan’s onto something — maybe Mrs. Francis, like so many characters in this world, is just struggling to stay relevant in an environment that no longer knows quite where she belongs.

That theme of displacement, touched upon by several characters in last week’s season premiere, was driven home more overtly (and, perhaps, less artfully) in “Tea Leaves,” as ad men Don and Harry found themselves at a rock concert, waiting backstage to meet The Rolling Stones. With the aim of signing the band to record a jingle for a major client, the once-hip Don Draper and the never-hip Harry Crane mingled among some young groupies and came off as big-time squares. To add insult to injury, Don and Harry never even managed to get near The Stones, since Harry had fallen victim to a case of mistaken identity. It seems these two ad boys just aren’t who they used to be.

Neither is Roger, who last night got rope-a-doped by Pete, even after having one-upped the kid just last week. On the heels of Roger’s office-swapping stunt in “A Little Kiss,” Mr. Campbell scored some sweet vengeance in “Tea Leaves,” as he proved able to exploit Roger’s fragile ego to embarrass the old man in front of most of the firm. Standing tall as the perceived adult on the new Mohawk Airlines account — and perhaps as one of the best assets available to Sterling Cooper Draper Pryce — Pete has come a long way since his sniveling and brown-nosing of earlier seasons. But what repercussions will this little caper have on his relationships with Roger and Don?

Though they never quite gelled into a satisfying whole, each story in “Tea Leaves” reinforced the overarching notion of the season thus far: The youngsters of Mad Men might finally be angling to put the old guard out of commission. Changes in social mores, business practices and civil rights are all flipping the script on characters who once seemed some of the coolest and most self-possessed on television.

Only Peggy demonstrated enough confidence to accept her uncertain future with a fair amount of grace. After being tasked with finding a new copywriter for the Mohawk project — someone who, Stan warned, might eventually supplant her — she bucked her co-worker’s advice to hire someone mediocre and selected Michael Ginsberg: a socially abrasive kid with big-time copywriting skills and, by his own admission, “no hobbies, no interests and no friends.”

And so the mercurial Mr. Ginsberg found himself the newest addition to the Sterling Cooper Draper Pryce family, thanks to Peggy’s eye for, and belief in, genuine talent. Michael’s hiring was a bold move and demonstrative of Peggy’s ever-deepening maturity — but it was also just the kind of thing that could put her own job, and maybe even the firm at large, in jeopardy.