SheKnows Girl Crush of the Month, entertainment host and fashion icon Giuliana Rancic, shares her inspiring story of facing breast cancer and tells us what’s next in her exciting future.

SheKnows Girl Crush of the Month, entertainment news host and fashion icon Giuliana Rancic, shares her inspiring
story of facing breast cancer and tells us what’s next in
her exciting future.

One title she never expected to hold though, was breast cancer survivor. After undergoing months of treatment and a double mastectomy in December, Giuliana is speaking out about her struggles and telling SheKnows why she is proud to share her story with women everywhere.

“When I set out to have this career, I never thought that reporting entertainment news would in any way help me inspire young women,” Giuliana told SheKnows recently when we stopped by her dressing room at E! News studio in Los Angeles.

Inspire young women she did, by sharing her story with the world and increasing awareness about a devastating disease.

Sharing her story with the world

“I think that was the best remedy for me, was to get back to work,” Giuliana told us. “A lot of people thought that I was nuts. People were like, ‘How can you go back to work so quickly?’ I’d rather get back to work, get some hair and make-up and put on all my fun, pretty clothes, get on set, totally distracted.”

Despite her recent struggles, the 36-year-old was beaming when we showed up at E!, always happy to be on set, doing what she does best.

“It’s truly a privilege to be able to have this job now,” said Giuliana. “I’m able to reach young women, and not only tell them what Britney Spears is wearing, but to also tell them how to save their lives, to be proactive about their health. Know that if it can happen to me, then it can certainly happen to anyone out there.”

With her makeup and hair looking perfect as always, and sporting a chic designer outfit, you would never guess that this woman had recently undergone a massive, traumatic surgery. Perhaps it’s Giuliana’s optimistic attitude toward life.

Moving on in style, in health and with hope

In addition to E! News, Giuliana also has her Style Network reality show Giuliana & Bill, her health and fitness blog Fab, Fit, Fun, and is releasing a new clothing line in September. 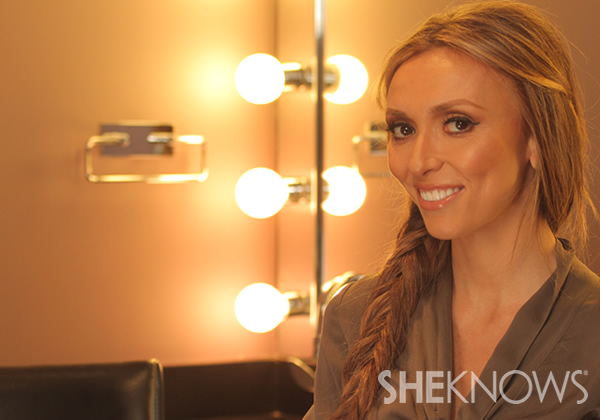 Item you love? “My wedding album”

The line, which G describes as “masculine chic,” will be manufactured by Tiger J, the brand behind Rachel Zoe and the Kardashian’s lines, and sold on HSN.

“Everything has a little edge to it,” said Giuliana. “It has super cool skinny jeans, skinny pants, amazing blazers that you can take from day to night, really chic little dresses. We’re even doing a few handbags that just came up last minute.”

And although her plate is already overflowing, Giuliana tells us she is not giving up on her hope for a baby.

“I think that I am more positive than I ever used to be,” Giuliana told SheKnows. “We are looking at all of our options, and we are open to everything. I think it will happen, for sure. Hopefully, this is our year.”

We hope so too!

Be sure to catch Giuliana and her hubby Bill Rancic on their show, Giuliana and Bill, Tuesdays on the Style Network.

Giuliana is wearing a Rachel Zoe Blouse with a plunge tie collar from Bloomingdales while Whitney rocks a classic black dress that makes her Lia Sophia Agape Cuff stand out. 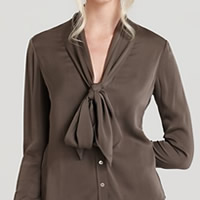 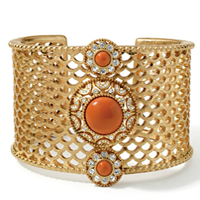