Is Taylor Swift dating Tim Tebow? We don’t know for sure, but that didn’t stop Reba McEntire and Blake Shelton from talking about it Sunday night during the Academy of Country Music Awards. 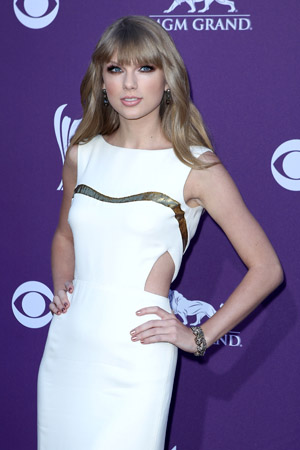 Taylor Swift kept it coy on Sunday night at the ACM Awards when the hosts made a joke about her rumored relationship with New York Jets backup quarterback Tim Tebow.

During the show, hosts Reba McEntire and Blake Shelton did a little back and forth about the rumored couple. “How about the rumor that Tim Tebow went on a date with Taylor Swift,” McEntire asked Shelton.

“Now we know what he’s been praying for,” Shelton replied, joking about the quarterback’s intense faith.

The big ACM Awards winner responded by shrugging her shoulders with her signature bewildered look, leaving some fans convinced that she did in fact go out on a date with the NFL player.

“Oh T-Swift you’re just too cute,” tweeted one viewer. “And you so just confirmed that you went on a date with Tebow.

The pair reportedly went on a dinner date last month in Los Angeles. “They were together for almost an hour,” a source blabbed to Celebuzz. “She approached Tim and he looked more than happy to be talking with her.”

We hope it’s true — these two seem made for each other with their “aww shucks” attitudes and goody-goody reputations. It looks like we’re not the only ones to think that way, either.

“Swift and Tebow both found untold amounts of fame at incredibly young ages,” relationship expert Cooper Lawrence told The Huffington Post. “He was a national star as a high school player — a number one recruit — while she was a pop star at the age most girls are graduating high school. Despite all the young celebrities we now have, the level of fame they have both achieved really is unparalleled.”

And she has plenty to teach him about life in the spotlight.

“I think she is better at negotiating the fame monster, and could be helpful to him in that regard,” Lawrence added.

Do you think Taylor Swift and Tim Tebow are an item?