Taylor Swift took home the top prize of Entertainer of the Year for the second year in a row at last night’s Academy of Country Music Awards, and one cozy couple will be able to pair their statues as bookends. 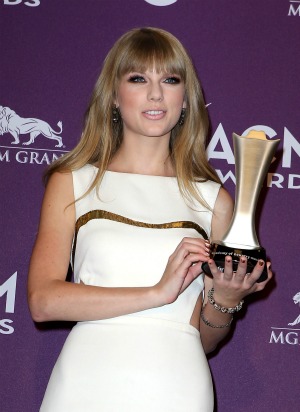 After gaining the support of her cat and her fans, Taylor Swift won Entertainer of the Year at the Academy of Country Music Awards last night — for the second year in a row!

“I’m so happy about this,” she told the crowd of the fan-voted award. “I want to say to my fellow nominees in this category, I respect you so much and I love you.”

One country couple celebrated double wins: Both Blake Shelton and Miranda Lambert took home the trophies in their respective categories.

“I own every record in this category and I’ve been listening and listening, thinking I’m not going to get it,” Lambert, who won for both top female vocalist and album of the year, said. “Every record is amazing, and I’m so thrilled. I will never take this trophy for granted. My albums are my babies.”

Complete list of winners at the 47th Annual Academy of Country Music Awards:

Entertainer of the year: Taylor Swift

Album of the year: Four the Record, Miranda Lambert