Kate Winslet is so over Celine Dion and that hauntingly annoying Titanic theme song “My Heart Will Go On” — so much so that it makes her want to barf! 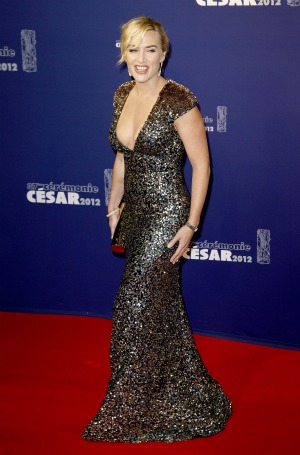 Just don’t play it around Kate Winslet. Whenever this Oscar-winning actress hears those pan flutes, she wants to puke.

“I do feel like throwing up,” Winslet told MTV News. “I wish I could say ‘Oh listen, everybody! It’s the Celine Dion song!’ But I don’t. I just have to sit there, you know, kind of straight-faced with a massive internal eye roll.”

“Every time I go into a bar in a hotel where there’s a live pianist, or into a restaurant where they’re changing their music according to who walks into the door, it’s thrilling for people to ‘surprise me’ with that song.”

It gets worse: Sometimes people actually want her to sing it. “I did a talk show recently in Italy and they actually had a live pianist who started gently playing the theme song,” she said. “I was not even gently, rather severely, urged to go and sing it as though I had in fact sung it myself in the first place. It was like, ‘No! I’m not going to do that.’ They’re like, ‘Oh no, come on it will be funny.’ No, it won’t be funny. At all. And I’m not going to.”

It’s not just the song that haunts her. Despite a body of work filled with another 16 years worth of critically-acclaimed films, the Titanic jokes still follow her everywhere she goes.

“Honestly, I actually now get onto boats and say, ‘No jokes, OK? No jokes. Can we just move on from that? And if you have any jokes, let’s just get them out of the way right now. Thank you. Anyone? Jokes, jokes? OK, moving on.’ And then they still tell jokes,” Winslet told MTV.

But of course it’s not all bad — the film did shoot her straight into superstardom with the ability to pick and choose pretty much any script she wanted — and she’s delighted that so many people love the movie that the rerelease is even possible.

“What’s negative about it? Really, nothing at all,” she said. “It’s very different and much more present. It’s bigger — if you can believe that — but it is and you really do feel like you’re in it.”