Rebecca Land Soodak’s Henny on the Couch is an incisive story of modern urban marriage and motherhood.

As a well-to-do Manhattanite with three children and a successful shop, Kara Caine Lawson should be a happy woman. After all, this world of privilege is nothing like the relatively impoverished home she grew up in with her alcoholic mother and no father figure to speak of. Yes, her husband may work too much, but at least her children have a father, and she does have help from her nearly live-in nanny. Even so, Kara feels that something is missing — a feeling that is only intensified when she notices that her former college-artist boyfriend has a show in the gallery just down the street from her shop. 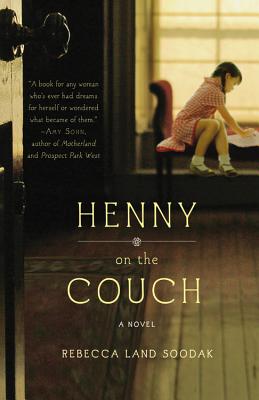 Between seeing Oliver’s paintings and actually running into him at a party with her family, Kara is caught up in a whirlwind of memories. Oliver may not have always made her feel valued, but he did make her feel. Plus, he introduced her to painting… an activity she once loved. At a time when her husband seems distant and her marriage is less than perfect, even a flawed past love is incredibly intriguing. Kara can’t expend all of her mental energy on Oliver, though. It is becoming increasingly apparent that her daughter desperately needs her. Flighty and disorganized, Henny is in second grade and still cannot read. Kara is growing increasingly worried about her, as is Henny’s teacher. All of these things combine to make Kara question if the life she has is really the one that she wants.

Henny on the Couch is a sharp and insightful look at modern urban motherhood. Kara is pulled in so many directions that she fails to take time to really understand who she is and what she wants. Certainly having a nanny helps her with her children, but she feels simultaneously like her parenting decisions are not being upheld by the woman who cares for them — and as if she has no partner in the process, her husband leaves the parenting and nanny-management to Kara.

Motherhood can at times be a lonely and unacknowledged job, but Henny on the Couch leaves the reader believing that author Rebecca Land Soodak understands the frustrations and isolation. Although Kara’s precise situation is not likely to ever arise for many of us, Soodak writes her in such a vulnerable and relatable way that all mothers are likely to find something to identify with.