Get ready for Betty! January Jones’ character returns to Mad Men tomorrow night, but Mrs. Francis doesn’t seem too happy about it at all. 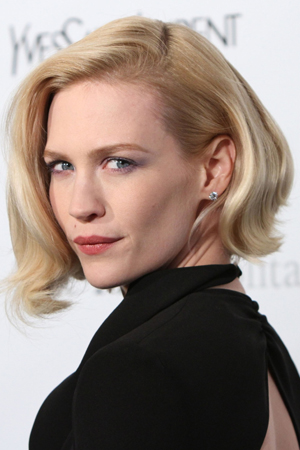 Betty Francis was nowhere to be found last Sunday, when Mad Men returned to AMC with a viral two-hour premiere. Expect to get reacquainted with January Jones in tomorrow night’s episode, as her character continues to grow grim this season.

“I think, more and more, as the seasons have gone on and Betty’s grown and become more comfortable with her emotions and expressing them, she’s become a darker character and a more unlikeable character for the audience,” said Jones to The Hollywood Reporter.

However, Jones pledges her allegiance to the role she plays, even if Betty is occasionally incomprehensible. “I’m attached to her. I don’t agree with a lot things she does. But I feel I should defend her. I don’t understand what she’s doing a lot of the time, but I will give her the benefit of the doubt that she’s trying.”

Because this season began filming just as Jones was giving birth to her son, the actress filmed some of the episodes out of order and is completely absent from others.

“I spoke with Matt before the season started about what we were going to do, because I had some physical things to work around,” she said of her pregnancy. “He came up with a great storyline for me this season. I’m excited for fans to see what Betty does. She’s always growing.”