Expecting Russell Brand to fall apart post-divorce from Katy Perry? Prepare to be surprised just how cool, calm and collected the comedian is today! 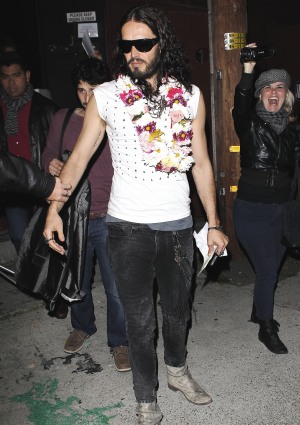 Russell Brand is completely, mysteriously calm in the wake of his marriage to Katy Perry biting the dust. Instead of falling apart like their once bright love, he’s putting some solid time into yoga.

“I’m doing well,” Russell Brand told People recently, insisting there’s no reason he ought not to be so.

Despite his obvious relationship turmoil over recent months, the 36-year-old commented a bit vaguely, “You don’t need to brush it off if you don’t get it on you in the first place.”

Take that, Katy Perry: Russell’s got a new gal >>

“I don’t have to let anything go,” the Arthur actor, pictured here stuck between a reveler and some mysterious green goo earlier this month, went on to say. “I don’t hold on to anything negative. It’s the same as zero-ness.”

Yet again he reiterated, “It’s not about letting it go. You can’t let go of something you don’t hold, you know. It’s meaningless, [and] much of our world is predicated on meaninglessness. And I don’t do that anymore.”

Movin’ on up: Katy Perry trades hubby for male model >>

Oh, wait — one more thing that doesn’t exist on the 36-year-old’s mind: that whole phone throwing incident and resulting arrest. The actor said simply it’s “meaningless to me. It’s like it never happened. It’s meaningless.”

If only the rest of us could let go of things so easily! Perhaps there’s something to this yoga he practices — or perhaps, does Russell Brand profess his “zero-ness” of caring a bit too much to be believed?

Are you buying that Russell Brand doesn’t care at all about his Katy Perry divorce?