Chimpanzee is a thrilling window into an ancient world — a world that is strikingly familiar yet dazzlingly curious at the same time. With crisply vivid digital cinematography, the jungle has never looked so alive and neither has its primate inhabitants! 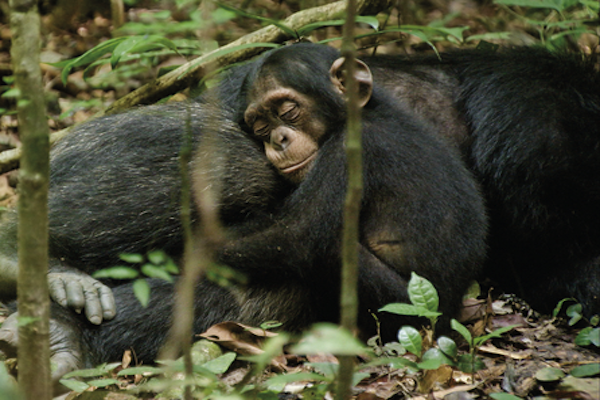 When we think of chimpanzees, we automatically think of the lovely and noble alpha-female, Jane Goodall — so it’s no surprise the Jane Goodall Institute is one of the documentary’s producers and have no doubt made a film that will inspire generations to come. This fun documentary follows a troop of chimpanzees, whose mothers care for their young in ways human moms will surely recognize.

The film starts with the general “monkey-business” of life in the jungle: cracking nuts, nursing babes and chimps bonding over a good grooming. The soundtrack is light and poppy but it’s the super-cute visuals that will have you and your kids giggling. The star of the film is the adorable Oscar, a baby chimp whose story is unprecedented in the world of chimpanzee behavior and fortunately for us, captured on film.

After losing his mother in an attack from a rival troop, Oscar is unable to feed or groom himself. Rejected by the other chimpanzee mothers who are preoccupied with raising their own young, it seems without human intervention, nothing short of a miracle will save him. But Oscar’s harrowing journey finds him with an unlikely caretaker that will make you question that ever-graying line between animal and human. This story inspires faith in humanity, knowing that from such primal roots grew our own ability to transcend animal instincts and put the benefit of others before our own.

Bottom line: With kid-friendly narration from Tim Allen, this movie inspires laughter, family bonding and an acute awe of nature. A perfect way to celebrate Earth Day, kids of all ages will leave the theater wanting more Chimpanzee. Enjoy!