Move over Backstreet Boys and New Kids on the Block, you aren’t the only game in town. The internet is crawling with reports that former boy band 98 Degrees is reuniting. Is it hot in here or is it just us? 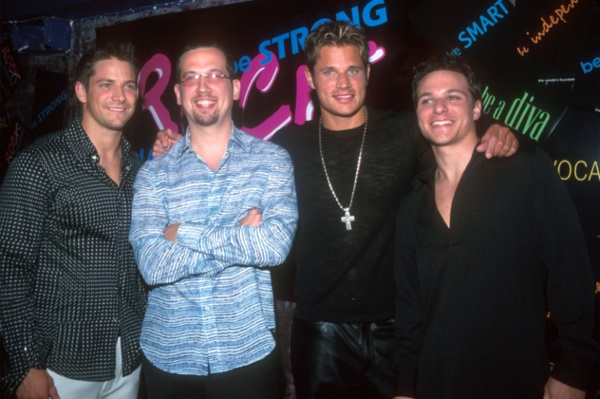 Who’s ready for some ’90s nostalgia? It was a time when the Backstreet Boys, N Sync, Britney Spears and Christina Aguilera ruled the airwaves. TRL was a top-rated show and Jersey Shore was just that — the shore of New Jersey.

According to the website RumorFix, one of the era’s biggest pop acts may be reuniting. They claim the members of 98 Degrees (which consisted of Nick Lachey, younger brother Drew, Jeff Timmons and Justin Jeffre) are together again. A close source says the group will embark on a 15-city tour between July and August of this year.

None of the group members have officially confirmed the news. But Wednesday, Timmons wrote on Twitter, “Look, you never can believe rumors, but I’d be open to it for sure!”

98 Degrees broke up in 2002, and since then, each member has taken a different career path. Nick became a reality TV sensation with ex-wife Jessica Simpson after starring in the TV series Newlyweds: Nick and Jessica. He then went on to become a television host (NBC’s The Sing-Off) and father to his first child with current wife Vanessa Minnillo.

Jeff joined the male dance troupe Chippendales, Drew won the second season of Dancing with the Stars and Justin ran for mayor of Cincinnati.

Over the course of their career, 98 Degrees sold 10 million albums and scored eight Top 40 hits. Their most notable release was 1998’s 98 Degrees and Rising, which featured the singles “Because of You” and “The Hardest Thing.” The album sold four million copies in the U.S.

Is the world aching for a 98 Degrees reunion?